EURGBP has recorded an impressive stretch of gains since May with the influx of no-deal Brexit risk driven by Prime Minister Boris Johnson taking over as head of British Parliament. Meanwhile, the ECB has communicated a monetary policy stance that appeared less dovish than expected which has exacerbated upward price action in spot EURGBP. That said, the currency pair seems overdue for a retracement lower and spot EURGBP selling pressure could be sparked by Wednesday’s high-impact economic data due for release out of the UK and EU. 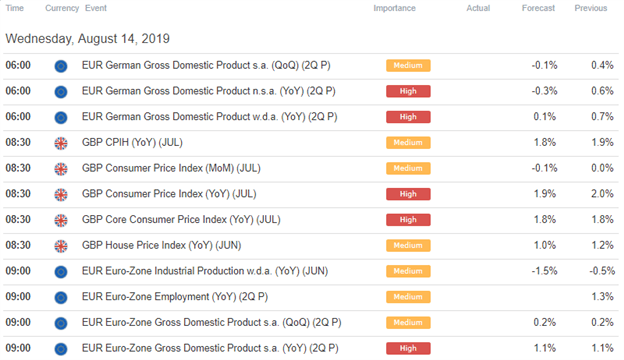 Take a look at the DailyFX Economic Calendar for a comprehensive list of upcoming economic events and data releases!

EURGBP forex traders will likely turn to the latest readings on UK inflation and Eurozone GDP slated to cross the wires at 8:30 GMT and 9:00 GMT respectively. Although, German GDP data will be released slightly earlier at 6:00 GMT Wednesday which could preview the headline Eurozone GDP figure considering that Germany is the cornerstone of the EU’s economic engine. Increasingly pessimistic outlook and disappointing data prints for the Eurozone economy does not bode well for bullish Euro prospects as it will likely accelerate expectations for additional ECB stimulus.

Also, the potential of UK inflation coming in hotter than the 1.8% figure expected could keep BOE rate cut bets at bay with the central bank opting to stay sidelined as the latest Brexit developments unfold. According to overnight swaps, rate traders are pricing in a 55% probability that the BOE cuts rates by 25 basis points before year-end. 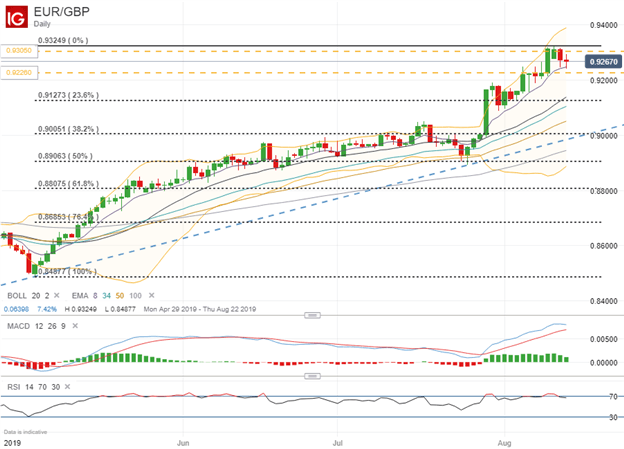 EURGBP overnight implied volatility of 8.11%, which is slightly higher than its 12-month average of 7.09%, suggests that spot prices will trade between 0.9226-0.93050 with a 68% statistical probability. Despite potential for a British Pound rebound, however, sterling selling pressure will likely linger with no-deal Brexit risk casting a shadow over GBP price action. 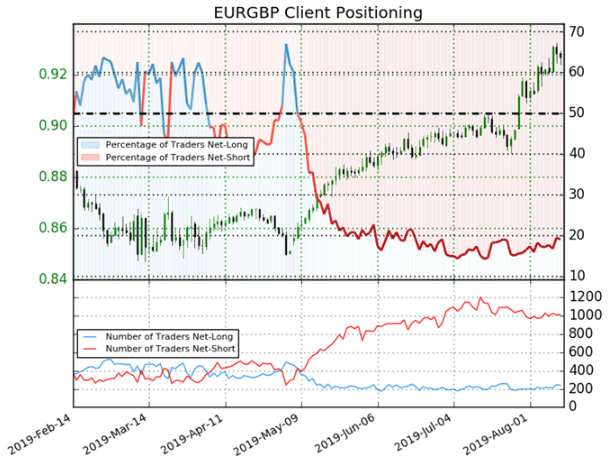 Yet, retail forex traders remain overwhelmingly net-short EURGBP according to IG Client Sentiment data and suggests spot prices could continue to rise seeing that we typically take a contrarian view to crowd sentiment. The number of traders net-long is 18.2% higher than last week while the number of traders net-short is 2.4% higher than last week. Overall, 19.1% of spot EURGBP traders are net-long resulting in a short-to-long ratio of -4.23.