On Sunday I wrote “equity markets have been dominated by the conflicting themes of trade wars and monetary policy as of late, and that trend looks poised to continue in the week ahead” but noted a distinct lack of scheduled event risk. Evidently, equity markets were gifted with unscheduled risk after President Trump announced the newest tranche of tariffs will be delayed – and some products will be entirely exempt. The postponement was also accompanied with news that US and Chinese officials will meet in two weeks.

While the economic conflict will continue to weigh on the economy as time ticks down until the extended deadline, one material development took shape in Tuesday trading. The office of the United States Trade Representative published a report outlining the items that will be exempt from the newest tranche – including cellphones. As a major component of the Dow Jones, Apple helped the drag the Industrial Average higher. Although AAPL has suffered from declining market share in China, the iPhone-maker still derives a noteworthy portion of its revenue from the country.

The exemption will help Apple directly but will also assist suppliers in other tech sectors. Finally, AAPL is a member of the FAANG group and is regarded as a bellwether of the broader stock market by some. An advantage afforded to Apple that does not extend to most other major tech companies could see it outperform its mega cap peers and help to boost tech sentiment. Given its unique position, Apple simultaneously runs the risk of lulling the market into a false sense of security and complacency. 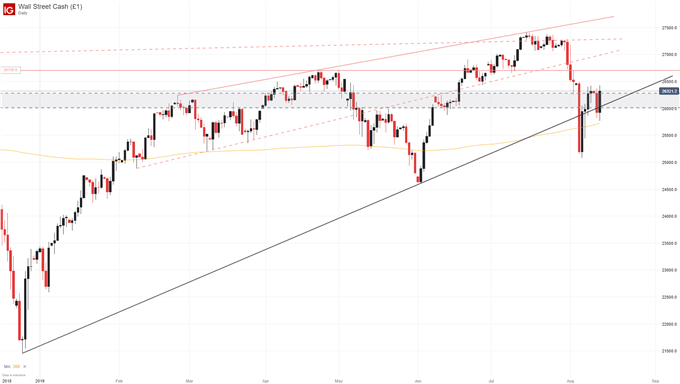 While trade wars will continue to put pressure on the economy and equity valuations, the initial shock to sentiment from the newest escalation may have been fully felt already. Further, corporations will now have the opportunity to stockpile inventory which will help offset some of the tariff impacts and could even see revenues balloon in the coming quarter as companies shift up their timeframes for delivery. Eventually, however, the tariffs will begin to weigh fully, and stockpiled inventory will thin. With a flurry of economic indicators flashing red, the longer-term headwinds for the Dow Jones remain very real despite the boost to the near-term outlook.

Shifting focus to Europe, the FTSE 100 will await CPI data. While the Bank of England is quite distant from the Fed in terms of expected rate cuts, any influence on the path of monetary policy can impact stocks. That said, the United Kingdom has more important issues at play with the Brexit deadline fast approaching. As time winds down, volatility may rise, and the FTSE 100 could track domestic developments more closely. 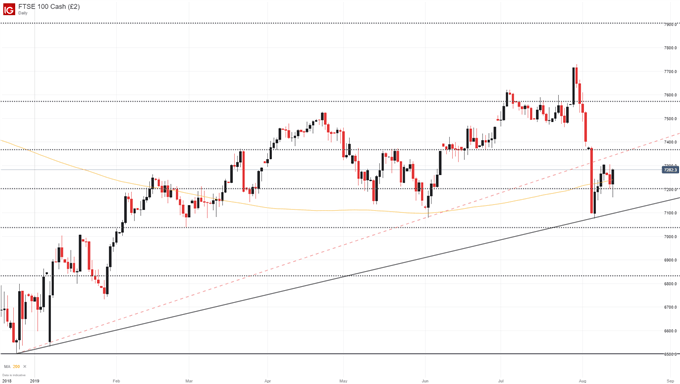 While trade wars look to dominate the headlines, Germany will look to provide insight on another major theme – economic growth. While the two themes are directly related, global growth concerns have receded from the headlines somewhat. An abysmal GDP reading from Germany, or the Eurozone altogether, could reignite those fears.

That said, a rising tide floats all boats, and the delayed tariffs out of the United States act as such a tide. Thus, the influence previously afforded to the CPI and GDP readings may lose some of their sway as traders remain enamored with the updated trade war landscape. Follow @PeterHanksFX for updates and analysis on these themes as they progress and what it means for equity markets. 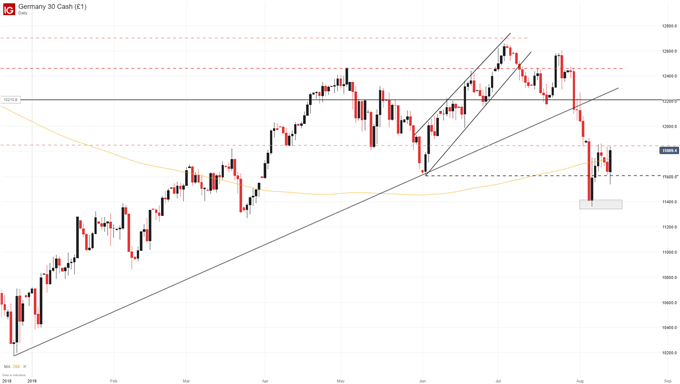