Stocks traded lower on Monday as the continued strain of US-China trade war weighed on risk sentiment. The resultant attitude of traders saw gold prices surge above $1,500 once again, while US treasury yields slipped considerably. The widespread risk aversion was not only reflected in price action, but also options volume which revealed traders were clamoring for downside protection on a variety of “riskier” exchange traded funds.

Data collected by Cboe reveals the most active put contracts were dispersed across a variety of funds, two of which look to offer a comparatively high return and are therefore exposed to greater risk. Traders were particularly bearish on the JNK ETF which seeks to offer a return like that of a junk bond. The most active strike prices were comfortably beneath JNK’s Monday closing price of $107 as traders bet the equity turmoil will continue and look to capitalize on potentially larger losses that might occur in very “pro-risk” vehicles. 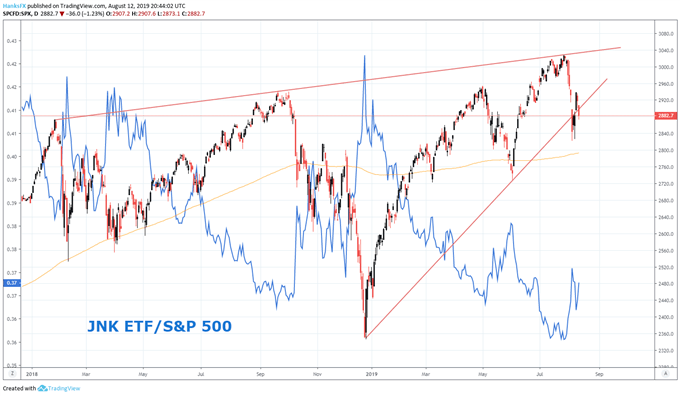 To that end, the emerging markets EEM ETF was another fund that saw a series of bearish bets. While EEM includes many emerging market economies, the fund is heavily weighted toward China at nearly 31% of its total holdings. Traders could be looking to explore a bet on deteriorating emerging markets at large, instead of China specifically through the FXI ETF, due to developing equity turmoil in Argentina – or as a way to exploit slowing global growth from the US-China trade war. Either way, the headwind offered by the economic conflict has become widespread and the lack of positive developments has begun to weigh more heavily on risk assets which has sent the EEM to S&P 500 ratio to its lowest since 2003. 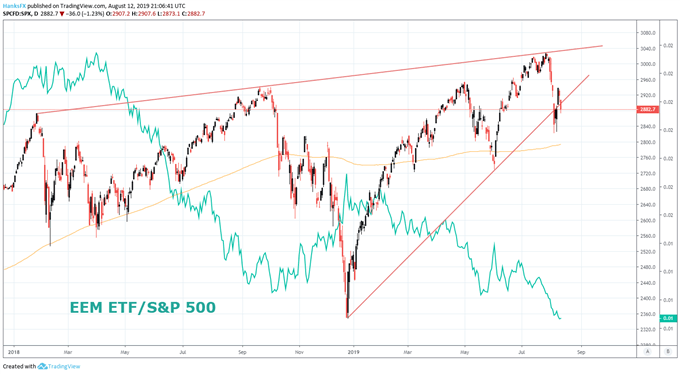 According to Factset, over 90% of companies in the S&P 500 have reported earnings for the second quarter and there has been a 40% increase in the number of companies citing “tariffs” in Q2 versus Q1. This is particularly significant because the sizable uptick occurred well into the trade war and many companies reported before the newest tranche was threatened.

The persistent and increasing nature of these tariff concerns speaks to the lasting pressure they can provide as opposed to a one-and-done shock after they are enacted. For more technical analysis and fundamental updates on the major equity markets, follow @PeterHanksFX on Twitter.