Sterling (GBP) Down But Not Out After UK Q2 GDP Contracts

The first look at UK second quarter GDP showed the economy contracting after a fairly robust start to the year. Q2GDP fell to -0.2%, missing expectations of 0.0% and a first quarter reading of 0.5%. On an annualized basis, GDP slipped to 1.2% from a prior 1.8%.

Commenting on the figures, ONS head of GDP Rob Kent Smith commented, “GDP contracted in the second quarter for the first time since 2012 after robust growth in the first quarter. Manufacturing output fell back after a strong start to the year, with production brought forward ahead of the UK’s original departure date from the EU.The construction sector also weakened after a buoyant beginning to the year, while the often-dominant service sector delivered virtually no growth at all.”

It was not all bad news as the UK trade deficit narrowed, as imports fell following a sharp rise in Q1 ahead of the UK’s original departure from the EU, according to the ONS.

After slipping lower on the release, Sterling picked up to show just a small loss on the day although GBP remains weak and may be vulnerable to further sell-offs. GBPUSD remains above last Thursday’s low print at 1.2079 – the lowest level since January 2017 – but remains at risk of further sell-offs, especially if the US dollar picks up. 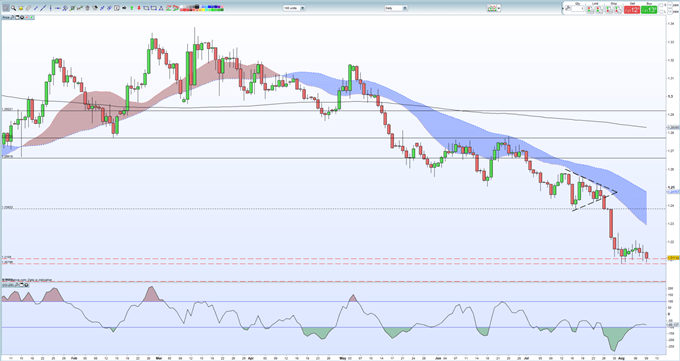 What is your view on Sterling – bullish or bearish? You can let us know via the form at the end of this piece or you can contact the author at nicholas.cawley@ig.comor via Twitter @nickcawley1.