GBPUSD currency traders are gearing up for heightened price action in the Pound Sterling with the UK Q2 GDP report on deck for release Friday at 8:30 GMT. The British economy is expected to grow at a year-over-year annual rate of 1.4% - a modest decline from the 1.8% figure printed in the first quarter. 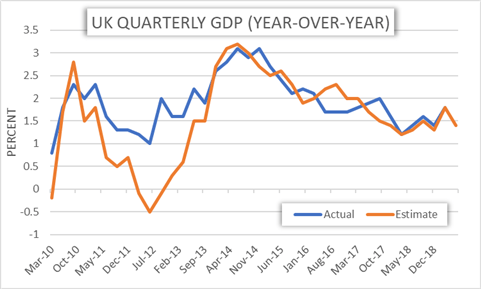 UK GDP growth has been on a steady decline and is not likely to return to post-recession highs any time soon with Brexit uncertainty weighing negatively on consumption, business confidence and investment. Also, with new PM Boris Johnson now at the helm of UK Parliament – a Brexit hardliner – the impact of heightened fears over no-deal Brexit could begin to show signs in the UK Q2 GDP report.

While there may be evidence of further inventory stockpiling which boosts economic output, which was the case found in the Q1 GDP report, this development is expected to serve as a headwind to GDP growth going forward. Yet, the British economy has remained quite resilient on balance all else considering. 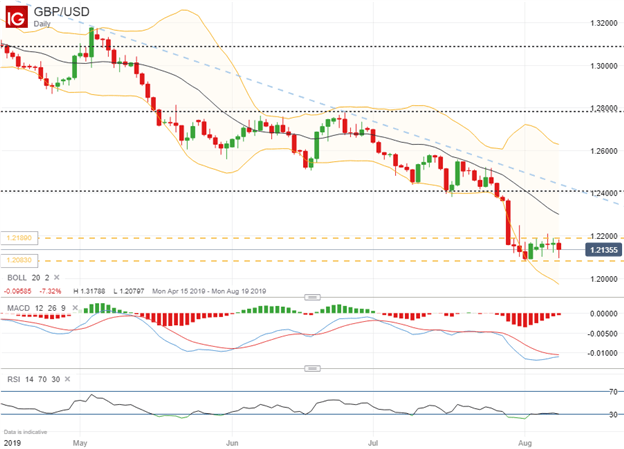 GBPUSD price action is expected to maintain a downward bias, however, considering the dominant headwind of no-deal Brexit risk even if tomorrow’s UK GDP report provides a positive sign for the economy. That said, spot GBPUSD might be expected to trade between 1.2083-1.2189 with a 68% statistical probability judging by the currency pair’s overnight implied volatility reading of 8.37%. 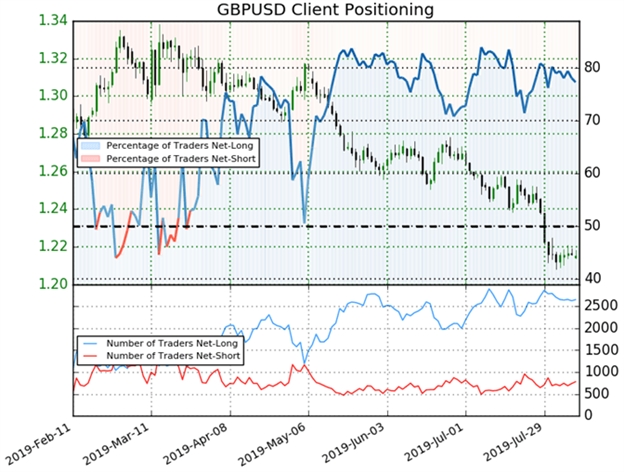 According to IG Client Sentiment data, 77.2% of GBPUSD retail forex traders are net-long resulting in a long-to-short ratio of 3.39 to 1. Traders have remained net long since 06 May when the cable traded near 1.2981; spot GBPUSD has moved 6.4% lower since then. Furthermore, the number of traders net long is 5.6% lower than last week while the number of traders net-short is 1.7% higher than last week. Seeing that we typically take a contrarian view to crowd sentiment, spot GBPUSD could continue to drift lower.