AUD/USD: Australian Dollar at Risk Ahead of China Trade Balance

In our most recent Australian Dollar outlook, we highlighted how AUDUSD in particular is exposed to downside risks stemming from the US China trade war. Despite the Reserve Bank of Australia (RBA) providing language slightly more hawkish than was expected, Governor Philip Lowe still reiterated the central bank’s willingness to ease monetary policy further if needed. That said, Thursday’s release of China trade balance data could provide Australian Dollar bears with another bit of evidence that the RBA will likely need to cut rates again in the near future. 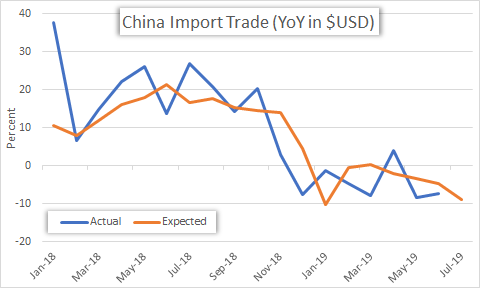 The Australian economy is closely tied to China with approximately one-third of Australia’s exports shipped to be consumed by the Chinese. Seeing that the Chinese economy has come under immense pressure as of late owing to the ongoing trade war with the United states, it appears likely that the trend of declining imports will continue which stands to sink spot AUDUSD. Another anecdote that might suggest additional weakness for the Aussie ahead is the relationship between AUDUSD and USDCNH. 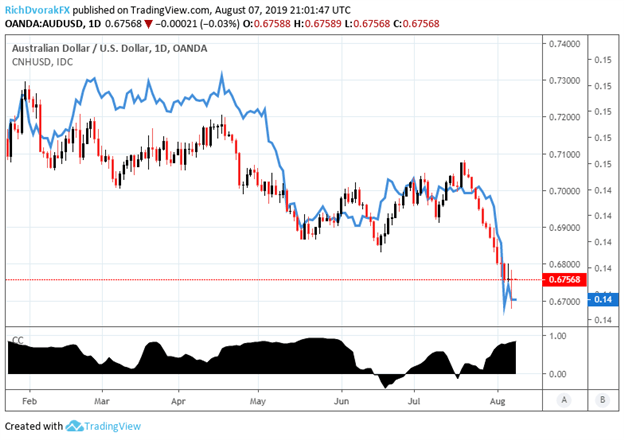 The Chinese Yuan, illustrated as CNHUSD in blue above, continues to weaken in light of US China trade war developments as uncertainty runs rampant and fears of slowing GDP growth mount. With the latest flareup in trade war tension, risk assets have spiraled lower along side the Chinese Yuan. As such, given the strong correlation between AUDUSD and CNHUSD, it is not inconceivable that spot AUDUSD could keep marching lower as the currency pair carves fresh multi-year lows dating back to the great financial crisis. 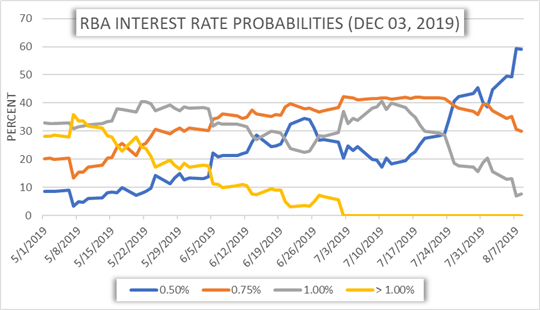 Additionally, expectations for the RBA to cut interest rates again this year have surged. Aside from the resurgence of US China trade war risk, the jump in the probability that the RBA policy interest rate will be halved to 0.50% by the end of 2019 was likely propelled further by a surprise 50bps interest rate cut by the Reserve Bank of New Zealand – a neighbor to Australia with closely intertwined economies. Consequently, the RBA is likely to follow suit of the RBNZ with more accommodative monetary policy. 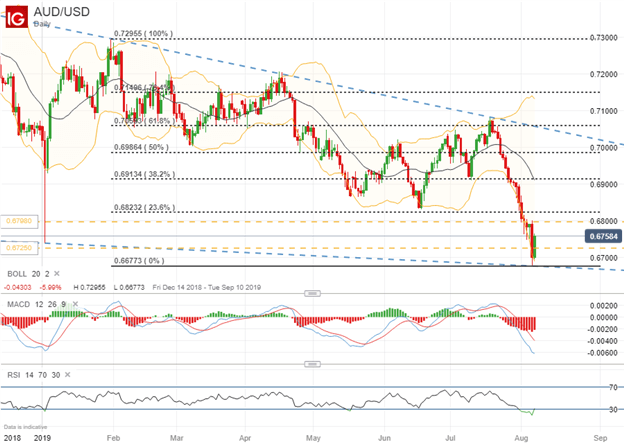