Crude Oil: Oil prices have continued to head lower as the broader market sentiment stemming from the escalation in US-Sino trade tensions weighs on the complex. Consequently, Brent crude futures have broken through $60/bbl and is now in a bear market since the 2019 peak. Yesterday’s larger than expected drawdown in the API (-3.4mln vs. Exp. -2.8mln) failed to lift oil prices, providing yet another reminder that the broader market is dictating the oil complex.

Chinese Yuan: Focus remains on the Chinese Yuan, in particular the fix (02:15BST), which had yet again been set firmer than the 7.00 handle, albeit ever so slightly at 6.9996. The question going forward is how much officials will allow for the Yuan to decline as the continued depreciation is likely to further weigh on global sentiment thus pushing equity markets lower. However, officials will have to be careful in regard to the speed of the decline as a freefall could spark capital outflows from China, further pressuring the economic environment.

NZD: A surprise decision by the RBNZ who cut rates by 50bps, sparking a plunge in the Kiwi. Expectations had been for a 25bps no analysts calling for a 50bps cut. Alongside this, Governor Orr had not ruled out further action in light of the ongoing economic uncertainty. Consequently, money markets are pricing in a near 80% chance of another 25bps cut by the year end.

Fixed Income: US yields have plunged throughout the session with the US 10yr yield dropping over 10bps to 1.63%. This in turn has seen the 2s10s yield curve edge closer to inversion as it narrows to 7.9bps, its tightest since the financial crisis. 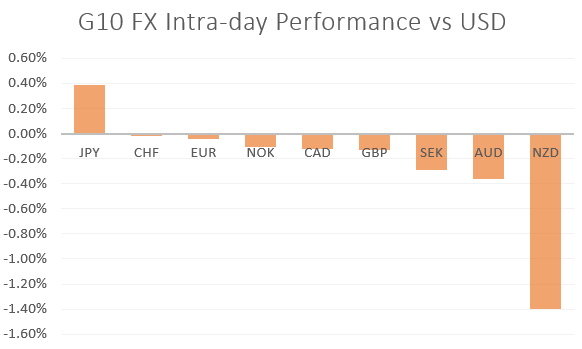