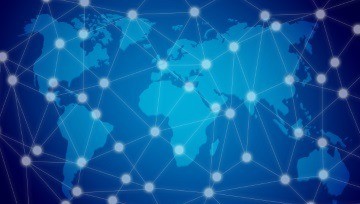 Bitcoin has bounced 20% since July’s FOMC meeting, which gave rise to an initial jolt of market volatility. The next day, President Trump unexpectedly announced a new tranche of tariffs on China which sparked considerable volatility across the financial world. One area that has been of particular importance - USD/CNH – traded above 7.00 for the first time in the history of the offshore market. In allowing USD/CNH to cross that line, the People’s Bank of China effectively signaled a willingness to enter a currency war. 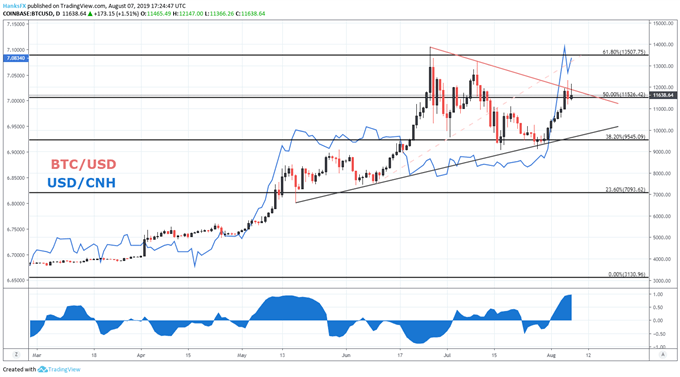 While that willingness will likely have greater implications for global markets down the road, the immediate boost in USD/CNH has spurred an increasingly positive three-week correlation with Bitcoin – which stands at 0.97 on Wednesday. The rolling one-week correlation is also statistically significant at 0.98. This is not the first time BTCUSD has maintained such a relationship with an emerging market currency as investors look to store, or move, their capital with cryptocurrency instead of their weakening local currency. Past examples include a wounded Turkish Lira working to assist BTCUSD in its 2019 rally.

Unfamiliar with past trade wars? Check out our guide,A Brief History of Trade Wars.

While the US-China trade war and the USD/CNH spot price remain in flux, Bitcoin’s recent boost arrived just in the nick of time from a technical perspective. Prior to the July FOMC meeting, Bitcoin had bled lower from its highs in June and July and was threatening a break beneath rising trendline support from May. While technicals towed the line until a fundamental breakthrough occurred, that breakthrough is now looking to boost the digital asset above another important technical level. 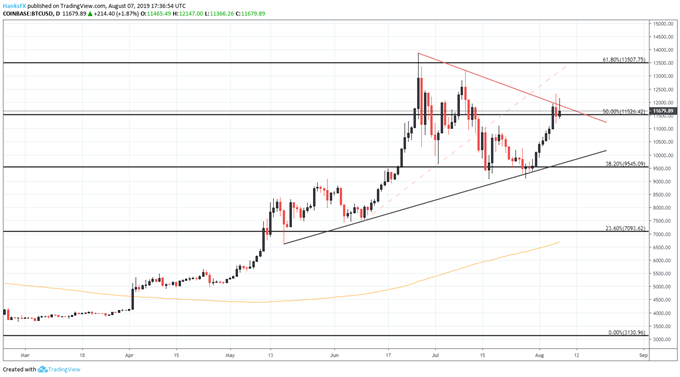 Trading around $11,650 at the time of this article’s publication, recent strength has propelled Bitcoin to probe the descending trendline marked by prior highs in 2019. Juxtaposing the ascending trendline from May, the two have worked to form a rising wedge – typically a bearish pattern. While the pattern is unbroken at present, continued tests at the topside could see the upper bound act as support in the coming days if the level can be surmounted. Further, BTC now enjoys moderate support from the 50% retracement around $11,525.

As BTCUSD runs out of room within the wedge, traders will fight to dictate the coin’s direction. That said, Bitcoin could find itself fluctuating between the two trendlines which would leave it more susceptible to a lower breakout especially if the fundamental tailwind wanes. Such a breakdown could see Bitcoin grasp for support at the lows of June in the $7,500 area with subsequent support potentially residing at the 23.6% Fib around $7,100. As price action unfolds, follow @PeterHanksFX for updates and analysis on the fundamental and technical factors impacting Bitcoin.