Brazilian stock markets will be in for a turbulent week ahead as US-China trade tensions flare up against the backdrop of a key vote on local pension reforms and the publication of the Copom meeting minutes. The benchmark Ibovespa equity index has fallen a little over 2.50 percent on Monday amid market-wide risk aversion from a deterioration in US-China trade relations. 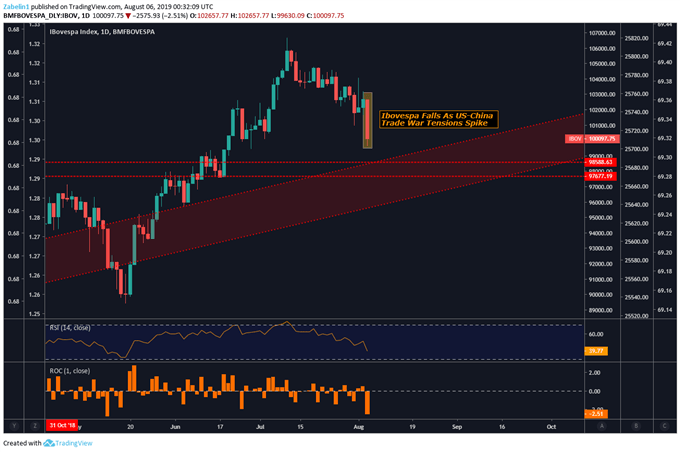 Last week, Banco do Brasil slashed the benchmark Selic rate by 50 basis points, surprising on the dovish side of markets participants’ anticipation of a 25bp cut. The publication of the meeting minutes of the 9-committee council will likely contain a more detailed outlook for policy ahead. The text is expected to carry dovish undertones after officials signaled futures rate cuts amid uncertainty and progress on pension reforms and soft growth.

Officials in the lower house of Congress will be voting for a second time on the market-disrupting bill after it was approved in a first-round vote on July 10. Lawmakers are expected cast their ballots Tuesday or Wednesday. If it survives, the bill will then move to the Senate where it will be further scrutinized by the Constitution and Justice Committee before going through two more rounds of voting.

After reaching five-month lows in July, USDBRL has since recovered over 6.70 percent and is now coming dangerously close to the psychologically-significant 4.00 level. The pair reached this point in May and was briefly hovering at 7-month highs before retreating. However, if US-China trade relations continue to go proverbially South and pension reform data disappoints, traders may have enough courage to test 4.00 again. 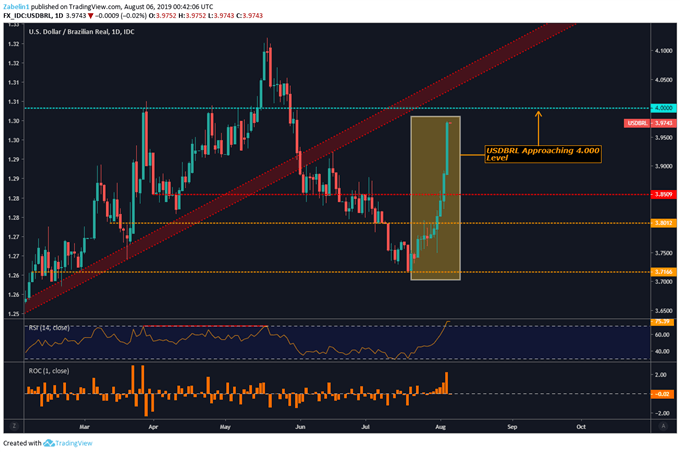 Fundamental headwinds may pressure commodity-linked and emerging market FX while supporting anti-risk assets like the US Dollar, Swiss Franc and Japanese Yen. Looking ahead, Brazil will have to carefully navigate the US-China trade war to avoid falling out of favor with either parties. Over forty percent of all Brazilian exports head to China, and the US is Brazil’s regional neighbor so maintaining cordial relations will be key.