USD: The US Dollar has continued to extend on its Fed induced gains with the greenback rising across the board. Yesterday, saw the Fed cut interest rates for the first time since December 2008. However, Powell’s press conference in which he stated that this is a mini-cycle adjustment has casted some doubts as to whether the central bank will deliver the number of cuts that markets had expected. Consequently, the US Dollar is notably firmer and with the summer lull upon us, low FX volatility may indeed bode well for the greenback which can benefit from carry trades. Alongside this, tighter USD liquidity following the debt ceiling agreement is also another supportive factor in the near-term.

GBP: The Pound had once again been on the decline, hitting a fresh 31-month low at 1.2086 before reclaiming the 1.21 handle. Today’s Bank of England Quarterly Inflation Report was far from ‘super’ with the central bank cutting their near-term growth outlook. Overall, there was little in the way of new information from the BoE given that they are effectively sitting on the side-lines until Brexit clarity is found, therefore focus moves back towards the Brexit headline watch.

EUR: The Euro is on the backfoot amid a wave of disappointing manufacturing PMI surveys from the Eurozone, further fuelling the need for ECB stimulus. Alongside this, marginally wider US/German 2yr bond spreads has also kept the Euro pressured, which is now eying a move to test the 1.10 handle. 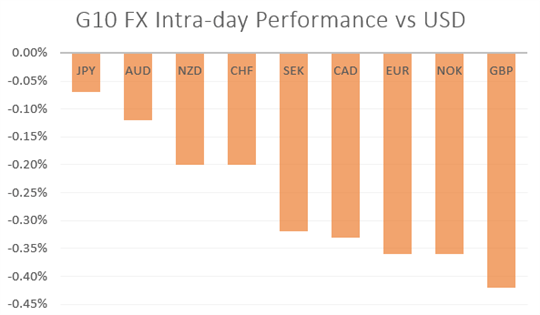