Below are some of the headlines from Mark Carney's press conference:

The Bank of England’s Monetary Policy Committee (MPC) has decided to leave rates unchanged at 0.75% in its August meeting as Brexit and global growth uncertainties continue to loom. They also voted to keep bond and asset purchase targets unchanged at 10b and 435b respectively.

The decision saw a small spike in GBPUSD as recent dollar strength coupled with increasing Brexit uncertainty has kept the pair trading near two-year lows. But the pair remained mostly unchanged as the meeting minutes failed to provide any further guidance into the next coming months, keeping Q2 growth expectations flat at 0% and a revision downward for the subsequent quarters.

Up until now MPC projections have been based on a smooth Brexit taking place, where gradual hikes would be needed in the months after the withdrawal is completed. Their stance has remained mostly unchanged as they stated that rate hikes would be appropriate, but they did add that they will need to see a recovery in global growth before interest rates are adjusted.

BoE Governor Carney is due to give a press conference at 1130 GMT.

UK inflation started to fall in August 2018 from year highs of 2.7%, led mainly by a drop in fuel and clothing prices. The steady fall in prices pushed back the need for the Bank of England to hike rates in early 2019, as global economies were experiencing slowing growth and other Central Banks embarked on a cycle of monetary easing. But the need to cut rates in the UK may be pushed back as a weakening pound will likely lead to a push higher in inflation, as imports become more expensive and the demand for domestic exports increases. This will leave the BoE with the difficult task of balancing Brexit and economic uncertainty with a potential increase in inflation as a result of a weakening pound.

Yields on UK gilts have continued to fall reaching their lowest level since August 2016. Current gilts offer a return of just 0.62%, down from 1.38% a year ago. The fall in yields coupled with increasing odds that a rate cut will happen before the end of the year continue to put downward pressure on sterling as pessimist sentiment in the future of the British economy takes over. 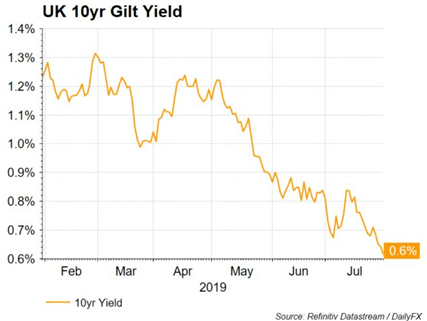