The Brazilian Real and Ibovespa will be in a for turbulent day as Banco do Brasil and the Fed prepare to announce their respective rate decisions. Markets are currently pricing in a 25 basis-point cut from both. Brazil has been struggling with sluggish growth amid a slowing global economy and uncertainty about the future of the market-disrupting pension reforms.

Earlier this month, the lower house of Congress approved the pension bill in a first-round vote and sent the Brazilian Real and Ibovespa soaring. Brazilian President Jair Bolsonaro recently announced that a second-round of voting will take place next week before eventually advancing to the Senate. Economy Minister Paulo Guedes said that passage of the bill is essential to ensuring financial stability and staving off a recession. 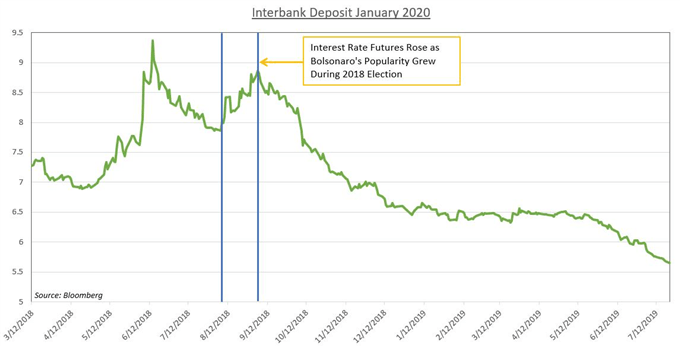 The sheer economic magnitude of the bill is the reason why political oscillations pertaining to the reforms are frequently reflected in financial market volatility, namely in BRL and the benchmark Ibovespa equity index. Perception about how the structural reforms are proceeding has also impacted sentiment, adding to the list of ailments including industrial underutilization and tepid inflation that may now require a monetary boost.

As such, Banco do Brasil will likely cut the benchmark Selic rate from its historically low level at 6.50 percent to 6.25 percent. Brazil’s pivot from neutral to dovish is part of a global trend of central banks shifting to accommodative monetary policy as the global economic outlook continues to get “worse and worse” to quote ECB President Mario Draghi.

The Fed is leading this trend as it reverses its rate hike cycle and pivots to more dovish inclinations after a period of neutrality. Overnight index swaps are pricing in an 82 percent probability of a 25 basis-point rate cut with the remaining 18 percent pricing in a 50bp one. But, even with a rate cut, the US Dollar may rise if Fed commentary spooks markets and overwhelms optimism from the prospect of looser credit conditions.

Sign up here for live coverage of the FOMC rate decision!