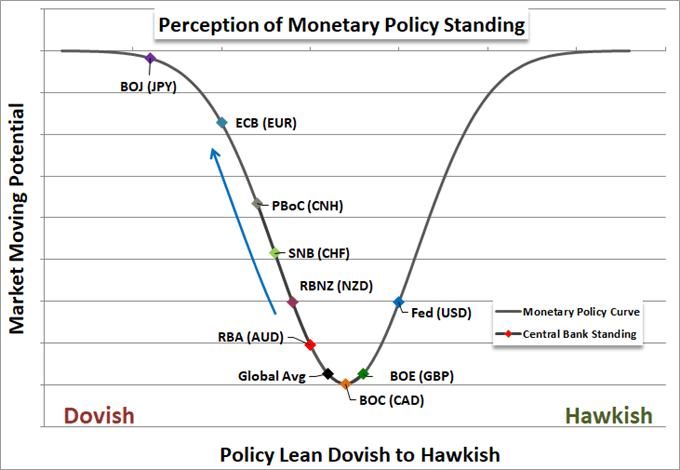 The Rate Cut That Can Rock the Global Markets

The top event risk for Tuesday wasn’t even scheduled for release during the session. That’s because the market is fully focused on the Fed rate decision due Wednesday afternoon during the US session (18:00 GMT to be precise). As the world’s largest central bank at the helm of the world’s largest economy and market, there is already a significant influence that stretches well beyond the confines of US assets. What makes it more remarkable is that US policy stance makes it by-far the most hawkish central bank amongst its global peers. There is an important signaling to be derived from this role. At the upper end of the policy spectrum for the core players in the ‘developed world’, its benchmark range of 2.25 to 2.50 percent is where the speculators see their artificial barrier; but this comfort with ‘normalized’ policy also represents the foundation of economic and financial enthusiasm. What is more paradoxical: that the Fed eased back the accommodation because it is confident in the potential for growth or that the markets are ready to claim disaster if the central bank doesn’t offer constant support?

Heading into this meeting there is an overt sense of expectation that the Fed will capitulate to the market’s and President’s demands. Whether you consult Fed Funds futures or overnight swaps, the picture is the same: certainty that there will be at least a 25 basis point (bp) rate cut from the group – the first since the final move in its dovish regime through the end of 2008. Beyond that, the market has pushed its speculative fervor even higher. The market is affording an approximate 20 percent chance that the group goes for a 50 bp cut in a more overt ‘insurance’ cut. I believe that is a low probability and it may ultimately lead the market to be ‘disappointed’ by such a decision. Pursuing such an aggressive cut would be done for one of two reasons. The more troubling scenario would be a fear by the group that economic or financial stability is at risk and warrants such an aggressive about face. Alternatively, a half-percent cut would be a more definitive statement as an ‘insurance cut’ that is used as a one-and-done. 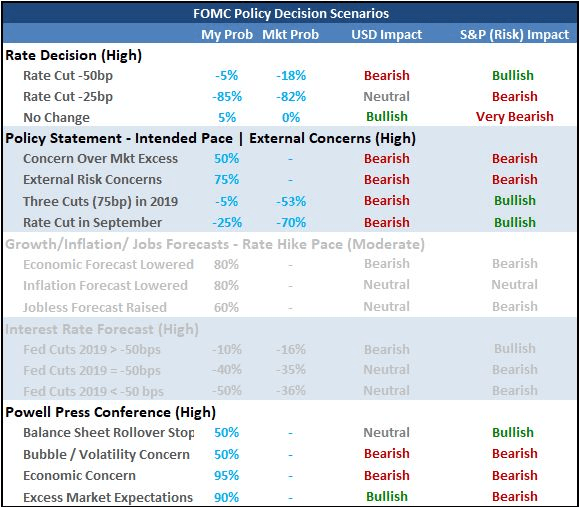 Speculation has been leveraged to exceptional levels around this particular event. While relative outperformance in US economic growth readings lately have added a little lift to US assets, it doesn’t account for the record highs from the Dow and S&P 500. That draws more from the anticipation that there is more central bank relief to come, affording additional speculative opportunity – otherwise known as ‘front running the central bank’. If this already stretched market is to be carried higher, there needs to be a tangible anticipation for further consistent rate cuts into the future. The probability of three cuts through year’s end is still holding above the 50 percent mark according to swaps, but that runs aggressively against the Fed’s own forecast. Recalling the June FOMC SEP forecast for no adjustments this year, one 25bp cut next and a hike in 2021; a signal of a series of cuts would dramatically diminish the central bank’s own credibility following a month of data that was notably favorable. If there is one thing to protect above all else in monetary policy, it is credibility. 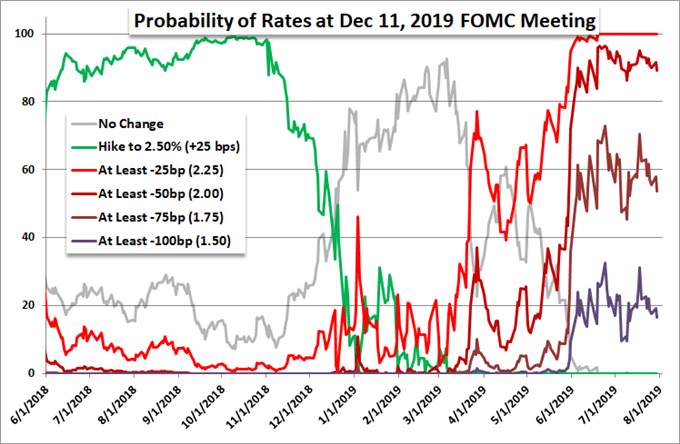 Monetary Policy from the BOJ and BOE Doesn’t Measure Up

As we head into such an important update to global monetary policy, it is important to recount the relative aspect at play for currencies and regional capital markets. The Dollar stands to lose much if the FOMC caves to the market’s pressure. While the Greenback has held buoyant despite the threat of an impending cut – up an incredible 8 consecutive trading days on an equally-weighted basis – the risk of an accelerated drop in associated returns for Dollar exposure can send the currency toppling lower. If the outcome, however, is one in which the authorities project intent to only cut 25 or 50 basis points only as a signal that they ‘mean business’, that would still afford a meaningful carry advantage to the Dollar – appealing only if the market maintains its desperation for slightly higher rates of return. 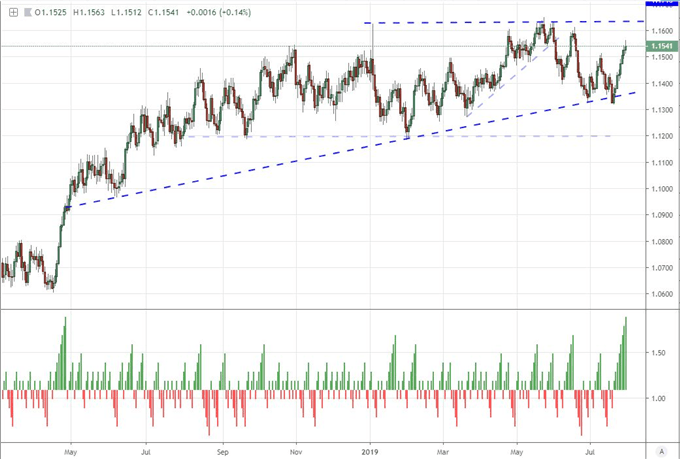 In contrast to the Fed’s ‘will they or won’t they’, we are dealing with more overt and domestic issues in the other major central bank decisions surrounding the Fed. This past session, the Bank of Japan (BOJ) kept its already exceptional stimulus program on pace and offered up a suggestion that more could be in store in the future if inflation falters further. No one was surprised by this rhetoric. Meanwhile, Mexico’s AMLO seemed to be borrowing a page out of US President Donald Trump’s playbook when he said he would like the Mexican central bank to cut rates in order to spur economic activity. Mexico’s quarter growth update is due later today. After the Fed, attention will turn to the Bank of England (BOE) Thursday, but there is very little capacity to alter policy course here when the ‘no-deal’ Brexit is such a pressing uncertainty.

For fundamental weight, the Euro deserves some significant credit this past session. An equally-weighted index of the world’s second most liquid currency closed a fourth consecutive advance. This would extend the most remarkable four-day climb for this measure since December 20th. What was particularly remarkable about this performance was the unsavory quality of the data on tap. French 2Q GDP cooled to a 0.2 percent pace of growth through the quarter versus 0.3 percent expected. And while German consumer confidence hit expectations of a downtick (9.7), Eurozone consumer confidence held fast at a painful -6.6 in its own reading. The first reading of the economic sentiment survey meanwhile dropped to 102.7 from the previous month’s 103.3 and business sentiment flipped to contractionary territory at -0.12. 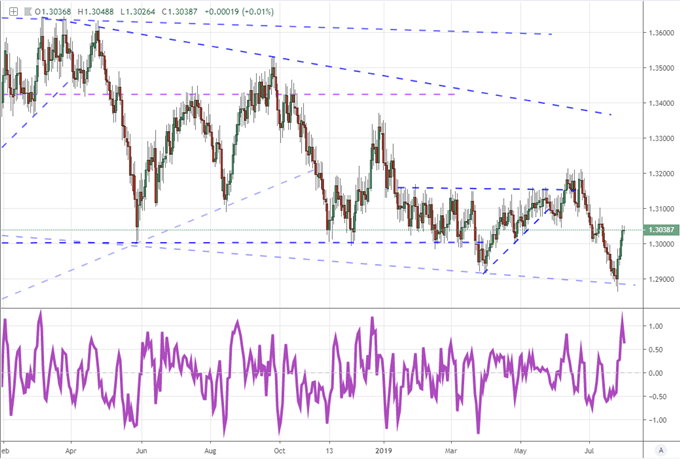 In the session ahead, we shouldn’t let the important economic data based on growth – the ultimate fundamental endgame – go overlooked just because there is a high-level monetary policy event on the agenda. Following on the European data run, we are due both the comprehensive 2Q GDP release for the Eurozone as well as the update from the most troubled core member from the region: Italy. These readings together will make for an influential update. Further on a substantially different scale relative to the entirety of Europe, Mexico is set to release its own growth reading. I don’t think AMLO is asking for some central ban support because the economy is doing ‘so well’.

Sterling Extends its Dive Despite a (Slightly) Conciliatory Boris Johnson

Looking outside monetary policy and growth to more targeted regional readings, the Sterling was feeling the pressure of momentum. Perhaps recognizing the unintended avalanche he had caused, new UK Prime Minister Boris Johnson attempted to walk back some of the extreme sentiment he stoked over the weekend and into Monday saying they were not aiming for a ‘no deal’ Brexit and that he would “hold out he hand” and “go the extra thousand miles” to bridge the gap with EU counterparts. The market was unconvinced if the four-day Pound slide was any indication.

Chart of GBPUSD and 4-Day Rate of Change (Daily) 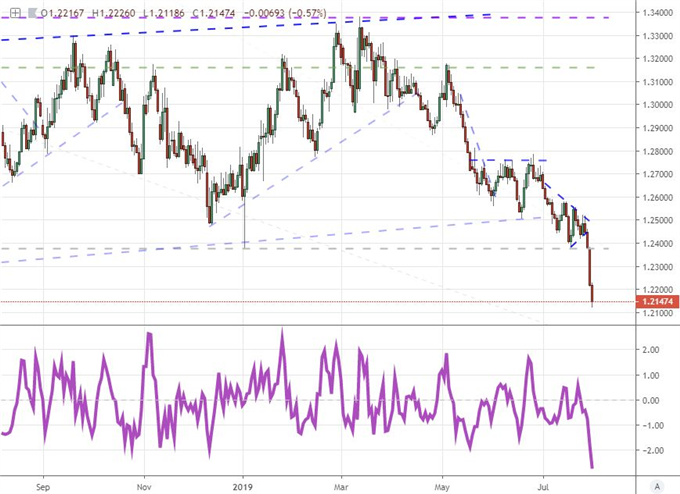 Another major worthy of mention for both its technical pain and fundamental intrigue is the Australian Dollar. AUDUSD dropped eight consecutive trading days through Tuesday and it hasn’t notched a ninth straight loss in over 25 years of historical price action. Perhaps the 1.6 percent read in headline and core 2Q consumer inflation (CPI) will help pull the currency out of its nose dive. I would not be too bold in the bullish anticipation though, particularly with a pair like AUDUSD where nothing will truly outclass the Fed. 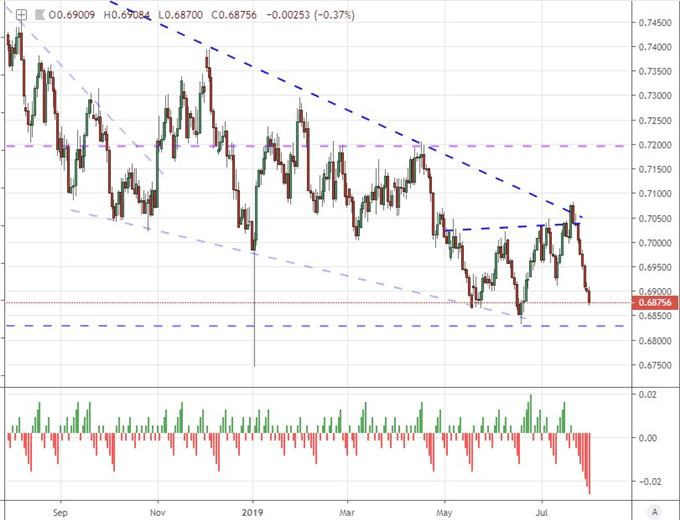 Are you following the FOMC rate decision closely due to its impact on your portfolio – or perhaps you are looking for opportunity? Join me as we discuss the event live. Sign up on the Webinar Calendar.