There were a couple of downgrades in their economic forecasts which might have resulted in JPY strength given that there was no shift in their forward guidance. The central bank lowered fiscal 2019 core CPI to 1.0% from 1.1% prior. Their calculations for inflation accounted for the anticipated impact of a sales tax hike later this year. For the same period, real GDP estimates were also downgraded from 0.8% to 0.7%.

While the Japanese Yen may be quiet for the time being, more volatility could be in store for the currency given the action-packed week ahead. The anti-risk JPY could see buying pressure on key events such as the Federal Reserve rate decision on Wednesday where the central bank is anticipated to cut rates for the first time since 2008. The Yen may also gain on US-China trade talks should investors unwind exposure from risky equities into safer Treasuries.

Regarding the former, there appears to be a decreasing propensity for the central bank to surprise more dovish before triggering a panic selloff in equities which may boost JPY. They have mentioned spillover concerns from a fragile global growth outlook. There is also the risk that those anticipating a 50 basis point rate cut will be disappointed, with Fed funds futures placing those odds at about 20 percent.

Against the US Dollar, the Japanese Yen is once again finding itself retesting critical resistance as it hovers under 109.02. In the big picture, this is as a result of consolidation that followed the push above the descending trend line from April in late June. USD/JPY’s oscillation resulted in channel floor being established between 106.78 to 107.21. If resistance holds ahead, this might result in another test of that floor. 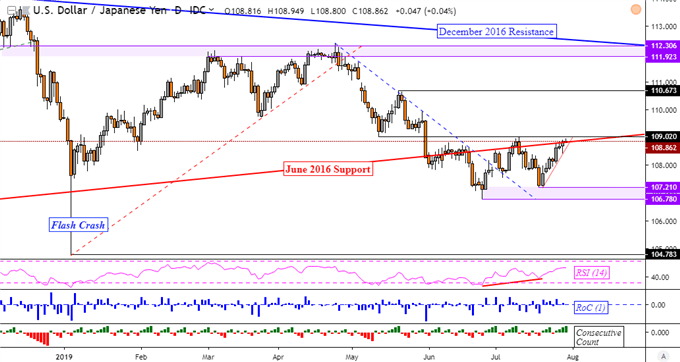 IG Client Sentiment meanwhile is offering a warning sign that the USD/JPY near-term uptrend could extend. Retail trader data shows that about 59.1% of participants are net-long, 2.2% and 15.8% lower compared to yesterday and the previous week respectively. We typically take a contrarian view to crowd sentiment.

To learn more about how to use sentiment in your own trading strategy, join me each week on Wednesday’s at 00:00 GMT as I uncover what IG Client Sentiment has to say about the prevailing trends in financial markets and follow me on Twitter here @ddubrovskyFX for timely updates! 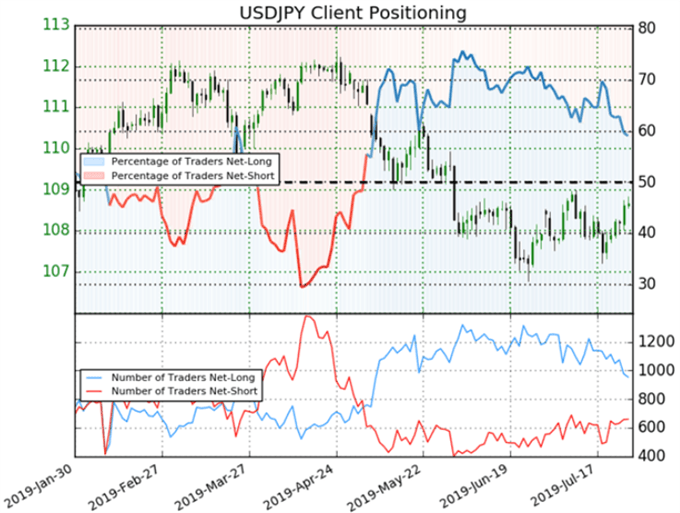