AAPL stock traded higher on Monday, likely in anticipation of quarterly results due Tuesday. The tech-giant currently stands as the second largest publicly traded company by market capitalization and some stock traders look to the corporation as a bellwether for the larger equity market. Consequently, Apple’s earnings report can carry significant implications for the entire equity market and have even sparked a currency flash crash. That said, there are various themes to watch, ranging from trade war concerns to sector-specific headwinds. Here are the three most important.

The first, and likely most important theme to be cognizant of, is commentary on the ongoing US-China trade war. Any indication that the trade spat has weighed, or will weigh, on earnings more than originally anticipated will likely rattle both Apple and broad-market investors alike. Given the company’s brand loyalty, size and robust cash reserves, it is widely believed Apple is well suited to withstand transitory threats. With that in mind, Apple shares may grapple with any negative development comparatively well while the broader market – comprised of company’s that do not enjoy the same attributes as Apple – may suffer the consequences. The broader equity implications this theme can carry make it the most important on the list.

Last week, Apple announced a $1 billion acquisition of Intel’s (INTC) smartphone modem business. The deal was inked to further progress Apple’s 5G technology for iPhones, but also carries consequences for another member of the tech sector – Qualcomm (QCOM). While the technology is still far from launch, the enhanced in-house capability for Apple will eventually allow Apple to avoid royalty payments to Qualcomm that total around $2 billion a year according to Bloomberg.

Interested in longer-term trades? Check out our Third Quarter Forecast s for Gold, EURUSD, the Dow Jones and more.

While the acquisition does not have an immediate impact for the parties involved, it may weigh on QCOM earnings in the future while allowing Apple to provide stable pricing. Therefore, what investors should look for in the earnings call on Tuesday is any commentary regarding the timeline and corresponding cost-cutting or revenue forecasts from the freshly-signed deal. This is likely to have the least impact on the broader-market, but could directly influence AAPL, INTC and QCOM.

Apple Services as a Means of Revenue Diversification

Finally, Apple investors await answers on the progress of the corporation’s services arm. Under CEO Tim Cook, the iPhone-maker has pursued an expansion of paid-services like Apple Music, iTunes, Apple Pay, and a new credit card partnership with Goldman Sachs. The service business has become an increasingly large, and therefore important, portion of Apple’s total revenue. As iPhone sales continue to plateau, further growth in the services sector will become the most critical aspect of the company’s earnings report. It will also help the California-based company compete with competitors like Microsoft (MSFT) which has already transitioned heavily into providing services versus hardware.

While the three themes carry different possibilities for Apple’s share price and potential to impact the broader market, each of them has the ability to spark volatility. That said, a highly anticipated rate cut from the Federal Reserve on Wednesday has helped to depress Apple’s implied volatility ahead of earnings. 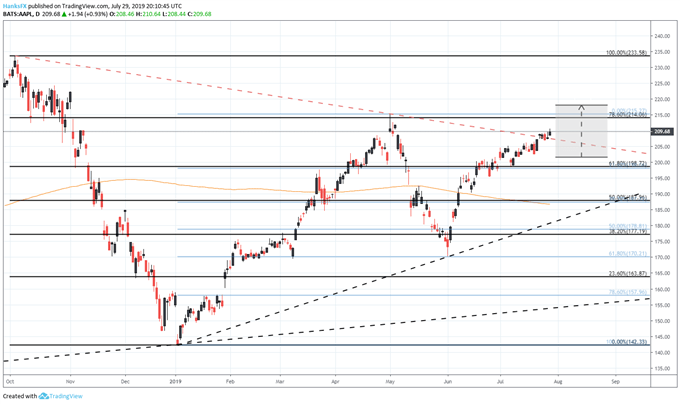 To that end, the implied price-range after earnings is just $17. Despite the relatively acute range, it encompasses one notable point of resistance around $215. The level marks the stock’s swing high on May 1 and could arguably pose as the right brim of a prolonged cup and handle pattern.

While the signal’s formation is far from perfect, a cup and handle pattern is typically followed by a bullish breakout when the cup’s brim is surpassed. An encouraging quarterly performance could see fundamentals align with technicals and drive AAPL shares through resistance at $215. Such a development would assist the stock in reclaiming all-time highs around $233. In the meantime, follow @PeterHanksFX on Twitter for stock updates and analysis.