The Nasdaq 100 may enjoy a boost headed into Wednesday trading after the Index’s second largest component – AAPL – offered strong quarterly results. The company reported earnings of $2.18 per share on $53.8 billion in revenue – beating out the expected $2.10 EPS and $53.3 billion in revenue. Consequently, AAPL shares climbed 2.7% to nearby resistance that was highlighted in the Apple Earnings Outlook. 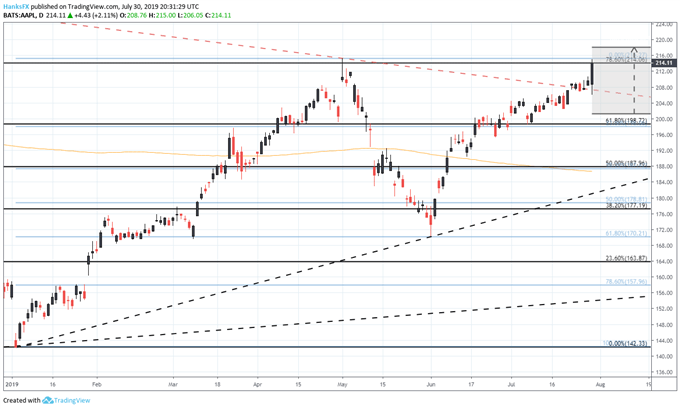 While the top and bottom-line performances were commendable, they are somewhat underwhelming in the broader context. A decision to cut revenue forecasts in January saw the stock plummet 7% and spark a USDJPY flash crash. Although the benchmark was lowered, the second quarter results outperformed narrowly. Further, revenue is expected to decline versus the year prior – from $266 billion to $257 billion. Despite lower revenue, the stock has soared nearly 37% in the year-to-date. The report also highlighted lukewarm growth in critical areas like services and iPhone sales.

Apple’s service arm has been an area of growing importance and was one of the top 3 themes to watch ahead of their second quarter results. That said, second quarter service revenue of $11.46 billion missed the expected $11.88 billion mark - a factor that may weigh heavy on AAPL shares if growth remains lackluster or contracts. Perhaps to stem concern, Apple CEO Tim Cook outlined one headwind facing the services arm, attributing a 3% reduction in services growth due to a strong US Dollar.

Sign up for our Weekly Equity Outlook Webinar to gain earnings insight and stock market analysis through the lens of global macro trends.

Continuing his commentary, Mr. Cook remarked on the state of sales in China, saying the company saw “marked improvement.” Renewed Chinese growth is a notable development for the company and their revenue outlook as it was one of the main drivers behind the initial outlook cut in January. Evidently, investors found the report encouraging as shares tracked higher near the top of their implied price range.

Meanwhile, a strong second quarter was undone by weak guidance for the third for Advanced Micro Devices (AMD) which saw the stock plummet 10% immediately after the results were released. Subsequent price action saw bulls regain some control – stemming losses to just 5%. The weak outlook could weigh on the individual stock and sector alike as a key driver of growth has its forecast dented. Either way, the stock market’s immediate reaction on Wednesday may be relatively restrained as traders await an event that possesses far greater control over global markets. 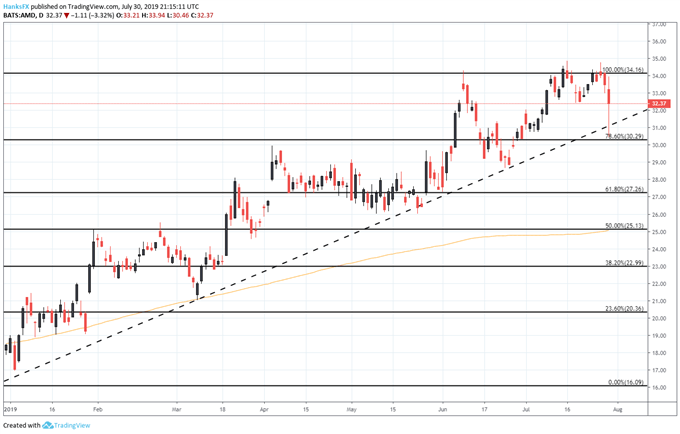 To that end, the Federal Reserve is widely expected to cut the Federal Funds rate by 25 basis points at their July meeting. A cut would mark the first since 2008 and the gravity of the decision has seen Cboe’s put-to-call ratio climb to its highest since December 21, 2018 as traders look to hedge their bullish bets and brace for potential turbulence. For more updates and analysis on these themes, follow @PeterHanksFX on Twitter. 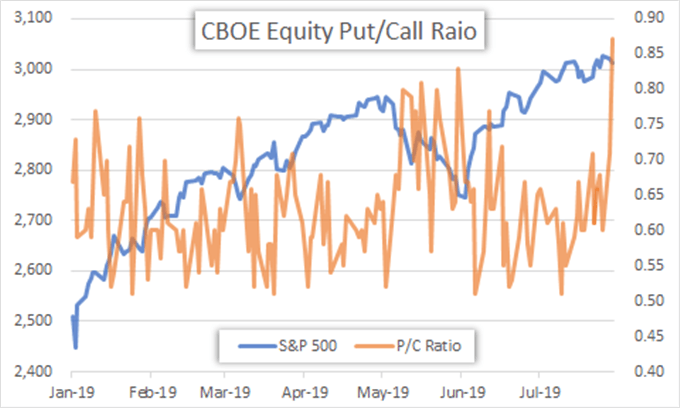 Read more: Bitcoin Price Chart is Coiled like a Spring, will it Bounce or Break?