There were prominent fundamental developments across the global financial system to start the week and there are more than a few sparks to expect over the immediate trading horizon, but the impact that these events have will be distorted by a single dominant event: the FOMC rate decision. The Fed rate decision on Wednesday carries the attention of the market-at-large owing to unique status as the world's largest central bank and the potential turning point that it finds itself in monetary policy terms. A certainty of a rate cut is reflected in Fed Funds futures and swaps, which has in turn amplified the market's interest exponentially. For the Dollar, the approach of a lower yield hasn't perturbed its course with a 7th consecutive session of climb when looking at an equally-weighted measure that reduces weight to EURUSD. That could very well reflect an FX line of anticipation where the FOMC keeps to its planned measured pace with an insurance ('one-and-done') cut that maintains carry advantage. If that is true, either the Dollar or US equity indices are in for a rude awakening. 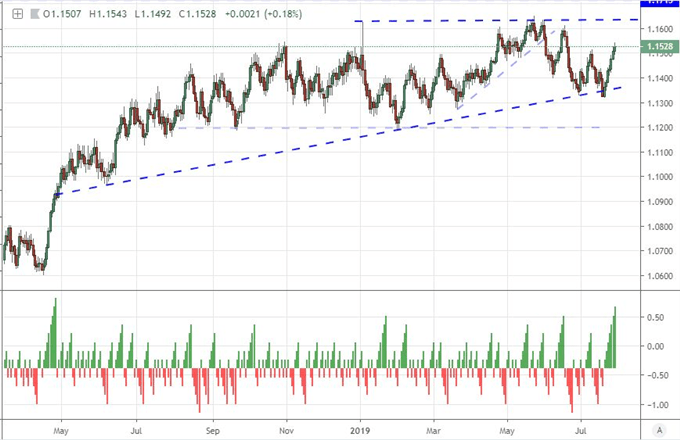 With such a systemically-influential event ahead of us, it will be difficult to register clear traction in other areas of the market or through other fundamental means - even the same theme of monetary policy from another major policy group. Early Tuesday, the Bank of Japan (BOJ) is due to update its policy; though it is expected to mark no changes. The maintenance of its extreme loose setting would surprise no one, but the context of the less-than-aggressive dovish drive from the European Central Bank (ECB) and aggressive expectations for the Fed will likely heighten the interest for this particularly extended group. We should start to account more of the global picture of monetary policy and its ability to support aggressive speculation rather than simply gauge the advantage or discount it affords individual currencies relative to each other. 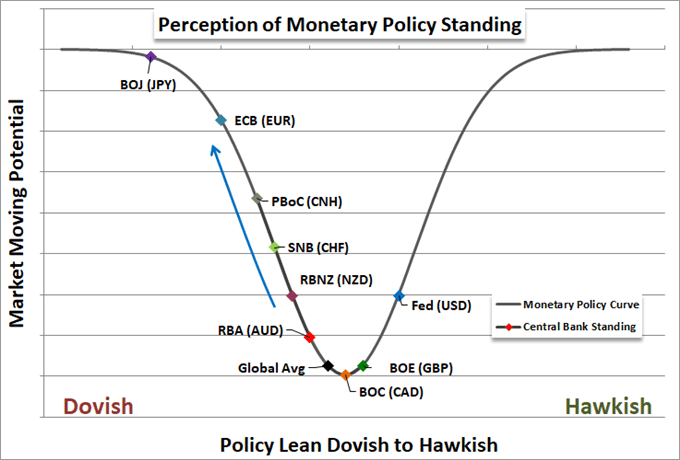 While the primary event this week is the Fed decision Wednesday, we will be hitting on other key themes that have waxed and waned for influence these past weeks. Growth last week was a reflection upon the disparate course differences as of late between the US and rest of world. After the momentum of news from IMF forecast to July PMIs to 2Q US GDP building the appeal of Greenback and Dow, we are now seeing the contrast develop on the other side of the scales. Saturday showed Chinese industrial profits - an important tie in to exports and manufacturing which is key to the country's growth - dropped by 3.1 percent last month, one of the biggest monthly declines since end of 2015. Tuesday, we are due the first of the European GDP readings with France's data due. Other indicators with an economic bent like the United States' own Conference Board Consumer Confidence survey should be accounted for but registered for reasonable market impact and not afforded a Fed decision-like assumption just because anticipation for volatility runs so high.

The contrast to the conveniently timed economic releases on tap this week are the lurking threats of a sudden flare up in trade wars. There is no clear event, and therefore time frame, for which we can peg a sudden jolt of interest in the fraying economic relationships of the largest countries; but the impact any unexpected developments could have is too enormous to right off just because it is difficult to prepare. President Trump's remarks last week that a compromise with China may not come until after the election has markets tabulating the economic pain into which that would translate. Similarly, the President's warning Friday that the digital tax from France would earn "substantial reciprocal action on Macron's foolishness shortly" should have investors on watch for the long-feared spillover of a costly trade war.

Chart of USDCNH with USDAUD Overlaid in Red (Daily) 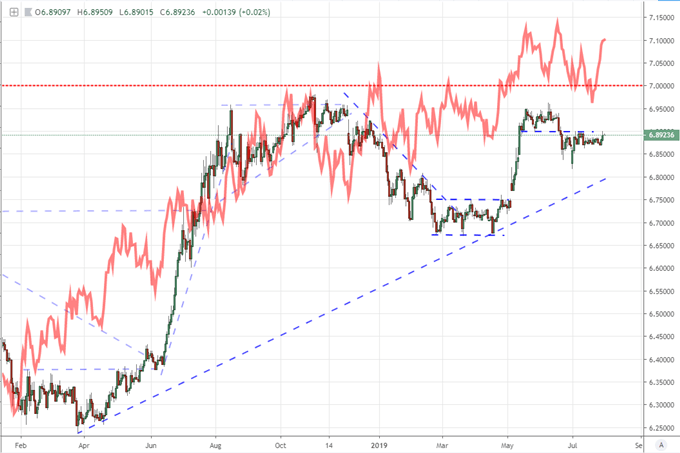 If we had to assign a title of biggest move through the open of the week, it would no doubt go to the British Pound. If left to the status quo of uncertainty as to our course between a Brexit negotiation impasse between the UK and EU against the backdrop of an October 31st deadline, we would likely have seen the Sterling level out. That may seem counter-intuitive, but the currency has already shed significant value these past months against the risk of uncertainty and the economic pain it is already registering, whether a solution was found eventually or not. However, the stakes were certainly raised over the weekend and into Monday by new Prime Minister Boris Johnson and his cabinet. 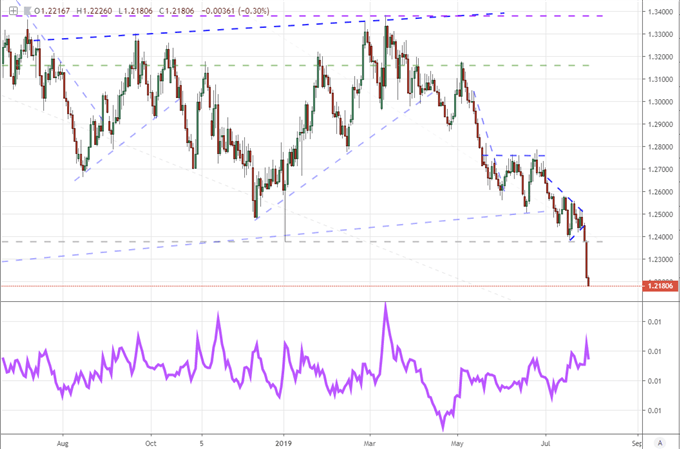 On the campaign for leadership of the Conservative Party and Prime Minister, Johnson made clear that he would not shy away from a 'no deal' Brexit if European negotiators would not afford a more favorable deal with the UK. Therefore, his aggressive stance shouldn't be a true surprise. Nevertheless, his remarks that he would not meet EU counterparts unless they agreed to abandon the backstop seems an insurmountable non-starter. To start the trading week, the Sterling has dropped across board with the worst single-day slump on an equally-weighted basis since November 18th and the lowest overall level since September 2017. This has registered as prominent technical breaks for GBPUSD, EURGBP and GBPJPY; while some other pairs like GBPCAD, GBPNZD and GBPAUD has leveled up to long-term support. How far will Johnson push this game of chicken? Lessons from the Dollar and Trump suggest it is wise not to assume the path of least resistance. 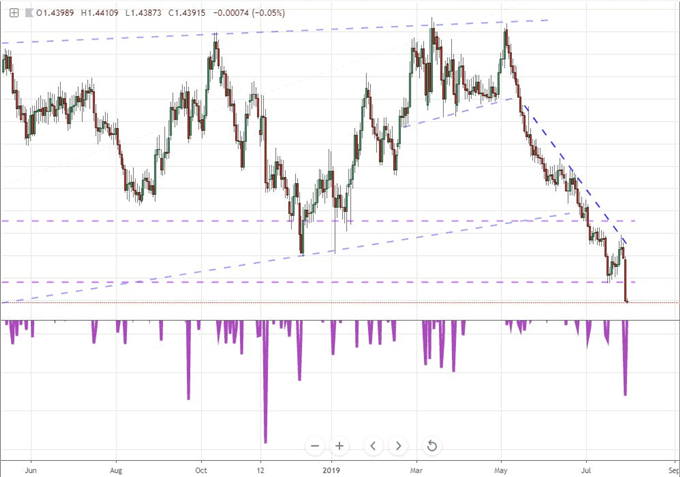 Account for the Fundamental Adjustments For the Euro, Yen, Aussie Dollar and Franc

Outside of the systemic or compounding fundamental themes, there are more concentrated event risks to consider for some of the other majors in the open market. The Euro is facing an interesting mix of domestic event risk from the French 2Q GDP reading to the Euro-area sentiment surveys in the upcoming session. That said, I'm more convinced that the currency will play the (ironically) more stalwart to a more unsteady Dollar, Pound and Yen. Though economic health leaves much to be desired and the ECB seems on pace for more aggressive easing, don't underestimate the Euro's capacity to offer outlet. 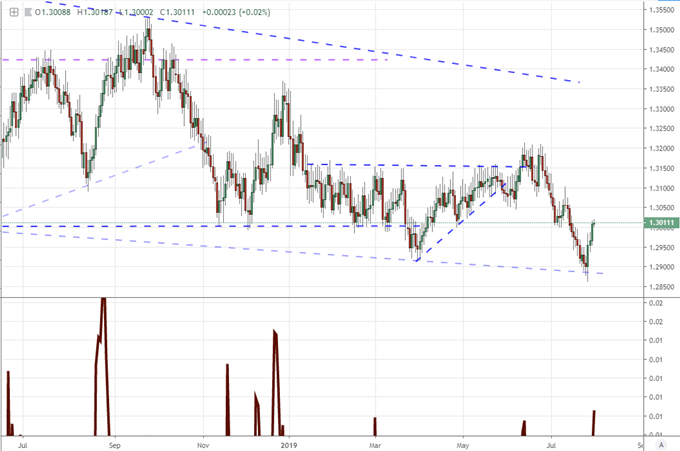 The Japanese Yen is another currency that should be watched closely for its inherent event risk. The Bank of Japan rate decision is unlikely to generate much of a response from the currency - as history has shown a fade in speculative response to the aggressively dovish central bank - but the event serves as the extreme end of the monetary policy curve for the major central banks. That may not lead to a clean move for the likes of the USDJPY, EURJPY or GBPJPY directly; but the underlying implications for risk trends will eventually make it back to the market's core.

Chart of USDJPY Overlaid with S&P 500 in Red (Daily) 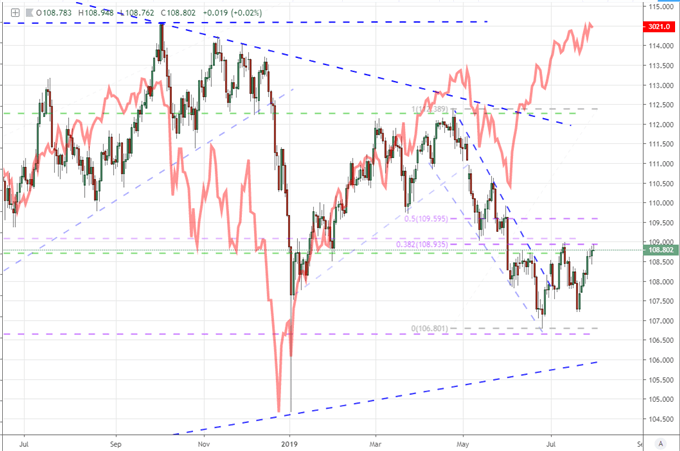 Two other currencies worth keeping a weary eye on are the Australian Dollar and Swiss Franc. In the former's case, we have a fallen carry currency that has started to shift to the same dovish perspective that has overtaken the global monetary policy mix. With the market already pricing in possibility of an RBA rate cut later in the year, the market will be tuned into Tuesday evening's (Wednesday morning for Sydney) 2Q CPI out of Australia. A weak reading would fit the loss of altitude for the group and likely render the stronger response. Meanwhile, the Swiss Franc is a haven for which the local central bank is attempting to dissuade interest. Reports that the SNB is attempting to intervene on behalf of the Franc renders as much response from the market as it has in the past (which is to say 'little'), but with Donald Trump calling fall more loudly as of late, we should not write off the significance of this effort. 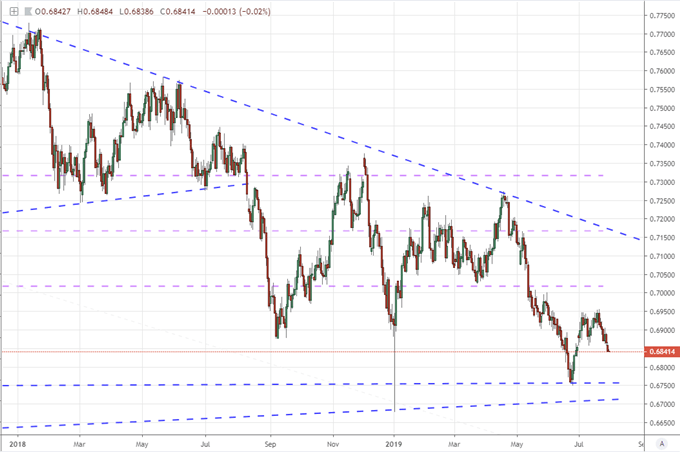 See how retail traders are positioning in EURUSD, GBPUSD and other Dollar-based majors alongsidea host of other liquid FX pairs using the DailyFX speculative positioning data on the sentiment page.