EURUSD Eyeing 1.1150 Ahead of German and US Inflation Figures

As the US dollar continues to rally on an expected dovish stance from the Fed, EURUSD will see some movement throughout the day as inflation figures will be released for both the dollar and the euro. The pair remained unsettled in the overnight session supported by weaker than expected French Q2 GDP, coming in at 0.2%, below expectations of 0.3%. The pair has been trading near 2-year lows on the back of USD strength which took the dollar index to two-month highs of 97.75.

But the euro regained some strength in the beginning of the morning session as the pair was pushing higher towards the 1.1150 barrier ahead of the latest round of Eurozone confidence data.

Both industrial and services confidence worsened in July leading to a decreased in the overall economic confidence within the Eurozone. Consumer confidence managed to pick up 0.6 points in July to -6.6 after dipping to -7.2 in June, well above its long-term average of -10.7 and moving closer to its highest level of -1.4 registered in May 2000. Economic confidence fell from 103.3 to 102.7 in the month of July, as continued trade wars, Brexit uncertainty and slowing growth keep investor confidence tilted to the downside.

Last week the ECB decided to leave rates unchanged in its July meeting, but it adjusted its forward guidance to reflect the growing need for a rate cut to happen. It mentioned that rates will be kept at current or lower levels until the first half of 2020, hinting that Mario Draghi is prepared to lower rates further into negative territory before he leaves office at the end of October, possibly taking the deposit rate to -0.5% with the likelihood of a tiered margin system to counteract the effects negative rates have on banks’ profitability. Special focus will be on inflation figures for the Eurozone which will be release on Wednesday, as a continued slump in prices will increase the likelihood of a rate cut happening at the next ECB rate decision meeting taking place on September 12.

Main Drivers of the Day - German and US inflation data

Focus will shift towards German and US inflation figures released later today, where weaker than expected German data will see the euro face continued selling pressure. PCE data from the US will see some moves in the pair as a weaker reading will lead to some initial dollar weakness but that may be quickly corrected as lower inflation will further support the need for a rate cut from the Fed in their July meeting to be held tomorrow, which will provide a driver for USD. 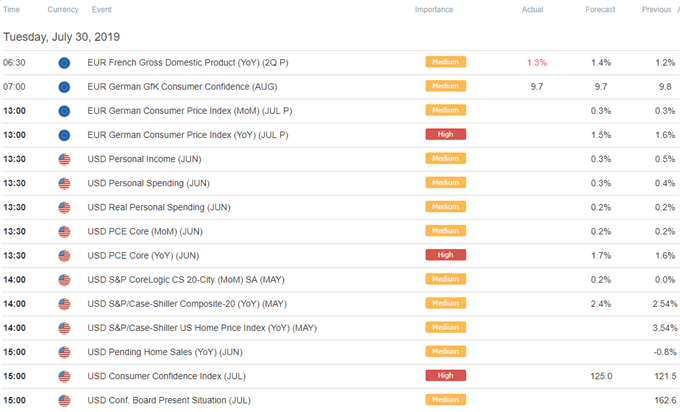