USD: The US Dollar is gaining across the board with the exception of the safe-haven JPY and CHF. Much of the gains in the greenback have been attributed to the drop in the Pound, which trades at fresh 28-month lows. With little on the economic calendar throughout the rest of the session, eyes will be firmly fixed on the upcoming FOMC meeting, in which the central bank is expected to lower interest rates for the first time in over a decade. On the technical front, YTD highs reside at 98.37.

GBP: No-deal Brexit risks continue to rise as Boris Johnson’s key cabinet members vocalise their step up in no-deal Brexit preparation. Over the weekend, Michael Gove stated that the government are working on the assumption that the EU would not strike a fresh Brexit agreement, while Foreign Secretary Raab noted that the change must come from the EU. Consequently, GBPUSD is breaking down with the pair testing 1.2300 as it trades at its lowest level in 28-months, while EURGBP once again hits key trendline resistance. That said, speculators have also increased their bearish sentiment on the currency with net shorts at extreme levels.

EUR: A big week for the Euro with key data in the form of Eurozone GDP and CPI, which will likely reaffirm the message put forward by the ECB last week, that a fresh stimulus package is needed. The drop in the Euro throughout the morning has largely followed the breakdown observed in the Pound. However, 1.1100 barriers that had spurred a bounce post ECB are at risk of being tested once again. 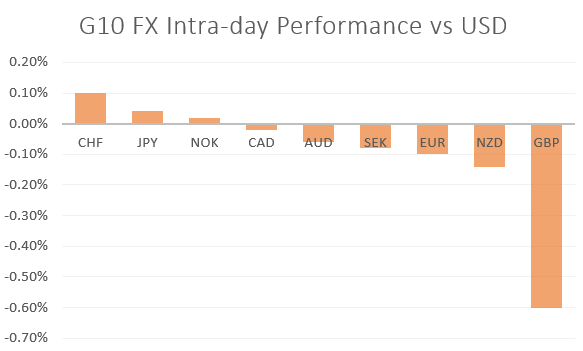