Increasing talks of a no-deal Brexit are not boding well for the pound as GBPUSD fell to 28-month lows and EURGBP surpassed the psychological 0.90 line. Since Johnson was appointed as PM last Tuesday the pound has fallen 1.5% against both the dollar and the euro, as he formed his cabinet with hard-line Brexiteer members, putting everyone on notice that he is serious about his “do or die” stance on Brexit. 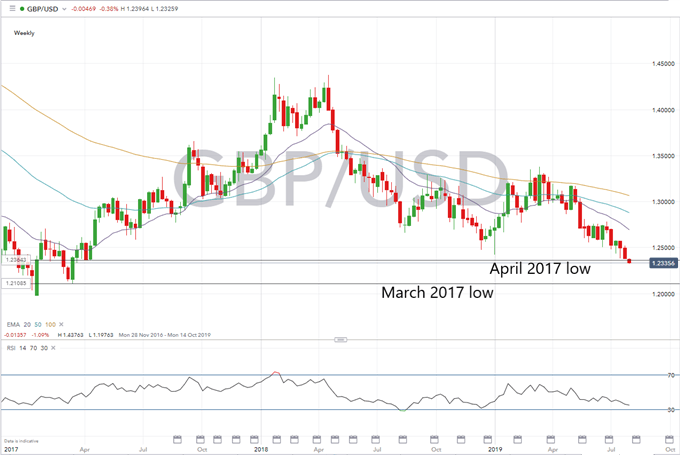 In recent news, Business Industry experts CBI have warned the government that neither the UK nor the EU are prepared to face the consequences of a no-deal Brexit, where almost every sector of the EU and UK would face disruption. The report suggests that despite UK businesses having spent billions of pounds already on contingency plans in case of a hard Brexit, the uncertainty and lack of clarity about dates and costs has left most of them feeling like there are not enough measures in place to counteract the disruption.

But instead of pressuring the PM to work together with the EU to achieve amendments to the current deal, Boris Johnson could use this information as leverage to continue his “deal or no-deal stance” if he believes that the EU will give in to pressure because they are also considered to be unprepared for a hard Brexit. But given the repeated warnings by EU commissioners that there is no possible amendment that can be made to the current withdrawal deal, it is unlikely that a new deal will be reached before the October 31 deadline.

Jean-Claude Juncker told Boris Johnson last week that the EU would analyse any proposals put forth by the UK as long as they were compatible with the terms set out in the agreement initially negotiated with Theresa May. The main point of divergence between both sides of the agreement is the Irish backstop, which would leave the UK abiding by EU rules unless another arrangement is found. Boris Johnson has said that the only way to avoid a no-deal Brexit would be to abolish the backstop from the agreement, which the EU has rejected.

The Bank of England will release its inflation report on Thursday ahead of its interest rate decision with expectations that rates will remain unchanged at 0.75% as MPC officials stick to their wait and see what happens with Brexit before adjusting its monetary policy rhetoric, given that both inflation and the jobs market are behaving well.

UK Trade Would be Left Under WTO Rules

If the UK crashed out of the EU on October 31 it would rely on WTO rules to govern its international trade, whereby the agricultural sector would be the one worse of as its products could face tariffs of up to 35%. Despite the government pledging to keep 87% of imports under a zero-tariff regime to counteract the immediate effects of a no-deal Brexit, some sectors of UK manufacturing would face becoming extinct.