The South African Rand (ZAR) is coming under renewed pressure during Friday’s trading session following news that Fitch Ratings cut South Africa’s credit rating to BB+ with negative outlook for the country. So far today, spot USDZAR is benefiting the most in response with the currency pair eclipsing the 14.200 handle and now trading at its highest level since June 26. Spot EURZAR and spot GBPZAR are also pushing higher to the tune of 1.01% and 0.67% respectively. 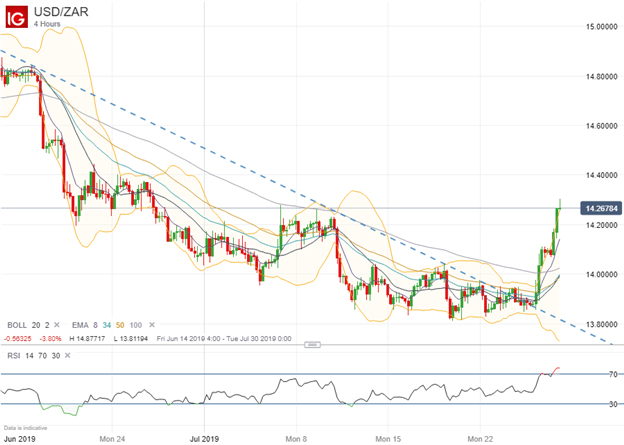 It is worth mentioning that the recent jump in spot USDZAR began prior to Fitch Ratings releasing its South Africa credit downgrade. The South African Rand began to come under pressure earlier in the week following the IMF World Economic Outlook showing a 0.5% cut to its 2019 GDP growth forecast and a 0.4% reduction to its 2020 GDP growth estimate.

The Fitch Ratings’ South Africa credit downgrade reflected “a marked widening in the budget deficit as a result of lower GDP growth and increased spending” which raised estimates for the country’s debt-to-GDP ratio. Concerns over the finances of state-owned electric company Eskom also contributed to the negative outlook.

While this could be chalked up to a “buy the rumor, sell the news” event, there could be another South Africa credit downgrade coming down the pipeline from Moody’s who currently lists the country at Baa3, the lowest rating for investment-grade status, with neutral outlook. Another credit downgrade would likely exacerbate weakness in the South African Rand which could keep USDZAR bid – even with a Fed rate cut expected next week.