Q2 GDP forecasts show that the US economy is likely to have experienced slower growth in the second quarter of the year on the back of continued trade tensions despite consumer spending being firm. It is expected that GDP grew 1.8% in the second quarter, which would be slowest rate of growth since 2017. Despite the figure being in line with periods when growth is slowing, it would be a sharp decline from the 3.1% growth seen at the beginning of 2019 and the worst figure since Donald Trump took office.

The period from April to June is likely to have seen an unwinding of stockpiles in response to the various tariff deadlines imposed during that period, bringing down the number of exports and weighing heavily on domestic output.

This carries the potential that the performance in June might have safeguarded growth more than expected, which could see GDP being slightly above expectations. This would see USD regain strength pushing GBPUSD and EURGBP back close to 2017 lows.

The fall in growth is unlikely to have an impact on the anticipation of a rate cut by the Federal Reserve in the meeting next week, but it will help gauge the health of the US economy and will provide policy makers with the tools to decide on whether more cuts are needed in the future. Despite the likelihood of the Fed cutting rates being high, if Q2 GDP is confirmed to be in line with, or below, expectations we may see a retracement in US equities as they react to a weakening economy, but that would quickly be corrected as a lower growth rate increases the likelihood of a rate cut, a positive sign for equity markets. 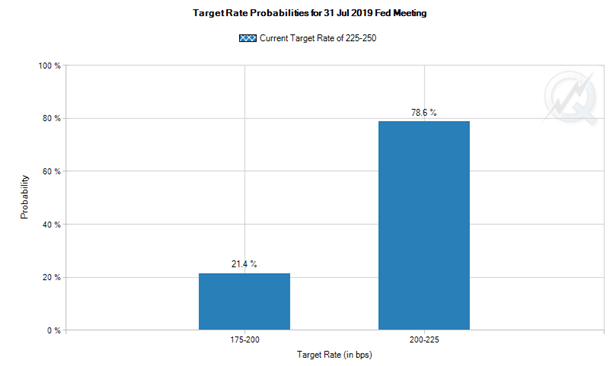