Boris Johnson – ‘No Ifs or Buts’ on Brexit

Boris Johnson used his first speech as Prime Minister to reaffirm that he will take the UK out of the European Union on October 31 with or without a deal, just hours after filling senior positions in his new cabinet with a raft of hardline Brexiteers. In his speech, Johnson said that the UK would leave the EU on time ‘no ifs or buts’ and that he would step up preparations for a no-deal, although this wasn’t his preferred choice. Johnson - never lacking in confidence – also stated that ‘never the backstop, the buck stops here’, a phrase that may come back to bite him if the EU offer no new concessions, or if Parliament continues to thwart the no-deal Brexit process.

Sterling is likely to have a rocky ride in the next few weeks ahead with talk already doing the rounds that the Liberal Democrats are mulling calling a vote of confidence in the new government in the very near future. While Boris Johnson is popular with a large part of middle England, he has a lot of vocal critics who will continue to attack his policies and speeches. The European Union has also reiterated that the Withdrawal Agreement cannot be changed, putting the onus back on Johnson to find a solution to Brexit which finds favor with the UK parliament as well as the EU, in essence calling his bluff on leaving without a deal.

GBPUSD currently trades around 1.2470 and the daily chart shows a symmetrical triangle being formed, a consolidation set-up that warns of a break-out either way and in turn added volatility. 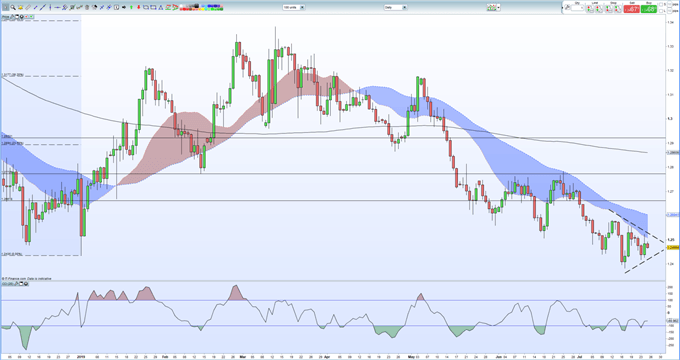 Retail traders are 75.0% net-long GBPUSD according to the latest IG Client Sentiment Data, a bearish contrarian indicator. However recent daily and weekly positional changes give us a stronger bearish contrarian GBPUSD trading bias.

What is your view on GBPUSD – bullish or bearish? You can let us know via the form at the end of this piece or you can contact the author at nicholas.cawley@ig.com or via Twitter @nickcawley1.