The Australian Dollar wilted Thursday as Reserve Bank of Australia Governor Philip Lowe said that lower rates could be coming if needed.

Speaking in Canberra on ‘Inflation Targeting and Economic Welfare’ Lowe said it was ‘reasonable to expect and extended period of low interest rates,’ and that it will be some time before inflation is comfortably back within the central bank’s 2-3% target range.

Lowe also said as seems mandatory that the Australian economy’s foundations remained strong in his view. Overall it seems there was very little in this speech to account for AUDUSD’s sharp retreat. Following this month’s reduction in the Offical Cash Rate to a new record low of 1%, there has been some guessing in markets as to how soon another cut might come, but there was very little dissent from the view that at least one more would be coming.

It’s possible that Lowe’s words have kept alive the prospect of a relatively near-term reduction. At any rate, the Australian Dollar market seems to have taken them as extremely dovish. 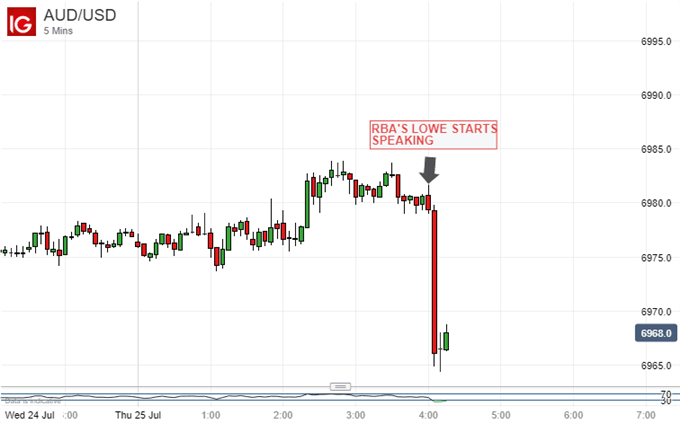 The Australian Dollar has perhaps counterintuitively risen over the last six weeks or so against its US rival despite the fact that the RBA has made the first back-to-back monthly interest rate cuts since 2012.

Among the reasons behind its strength have been increased perceptions that US interest rates will be heading lower too, perhaps as soon as the end of this month. Then there are iron ore prices, which have risen sharply this year and continue to do so as supply glitches around the world lend support. This crucial industrial raw material is Australia’s principle commodity export and of course offshore customers need Aussie Dollars to pay for it.

However, it is notable that AUD/USD has once again failed to break out of its dominant downtrend, which suggests that the Aussie’s utter lack of monetary support is once again beginning to drag on it. 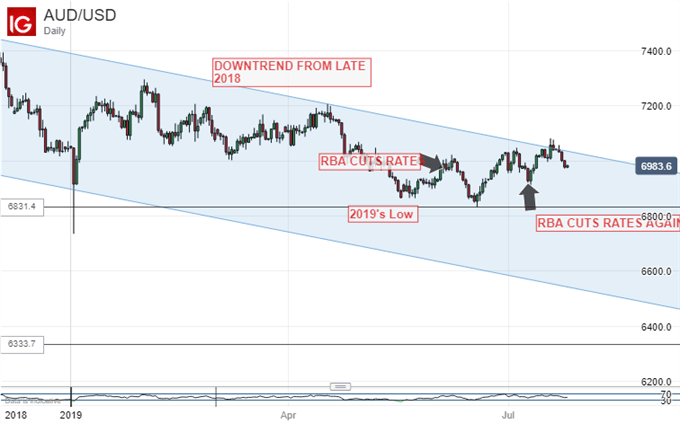 Australian interest rate futures pricing suggests suspicions that the record low, 1% OCR will be heading lower by the end of this year.