The Nasdaq 100 surged to record highs early Wednesday, despite an announcement that the Department of Justice will open a review of some of the country’s largest technology firms regarding anti-trust violations. Google, Apple, Amazon, Microsoft and Facebook are the corporations in the crosshairs, the last of which will report quarterly earnings after the close Wednesday. Facebook’s earnings call will mark the first opportunity for Wall Street analysts to question a tech management team on the perceived threat from the investigation and the impact it could have on earnings and the sector at large.

FAANG member Facebook is the second of the group to report, behind only Netflix which suffered a miss and subsequent pummeling of its share price. That said, the stakes are raised headed into Wednesday’s close with Facebook in position to dictate tech sentiment until Thursday afternoon when Amazon (AMZN) and Google (GOOG) are slated to report. 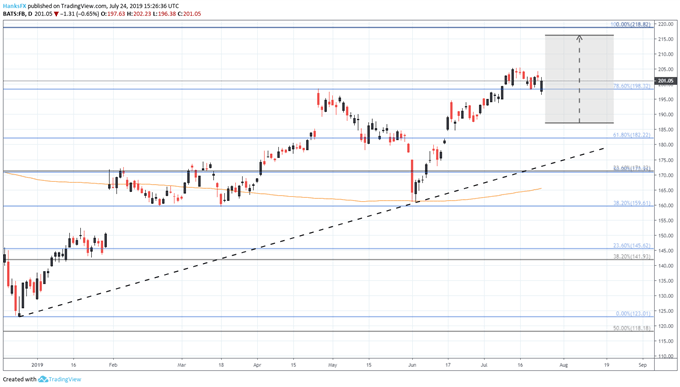 As for price action, options pricing reveals the earnings-implied volatility is a moderate 7%, resulting in an implied price range of nearly $30. The range lacks significant technical levels aside from the 50% Fib around $198. Over the next month, implied volatility is just 18.5% for expected price action - relatively low considering the typical volatility of the technology sector and the ongoing earnings season.

Similarly, Elon Musk’s Tesla is expected to experience notable volatility over both the short and medium terms. TSLA earnings-implied volatility is also a moderate 7.3% as the company is often viewed as a tech-automotive hybrid company. Regardless of sector, Tesla has a history of price volatility – particularly around earnings – largely due to public opinion and widespread headwinds the company has faced. To that end, implied volatility over the next 20 trading days is significant at 28%. 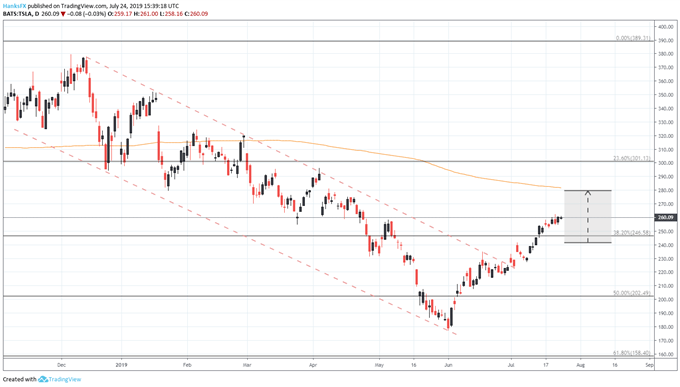 That said, TSLA shares enjoy two nearby technical levels of note. To the topside, the 200-day moving average resides narrowly above the implied price range and could look to keep shares contained at the upper bound if earnings impress. To the lower side, Fibonacci support at $246 may attempt to limit downside moves.

Finally, Ford Motors (F) will report alongside Facebook and Tesla. The bonafide auto manufacturer faces a series of headwinds ranging from waning consumer confidence to higher input prices and a strong US Dollar. While the former may suggest customers will wait to purchase big-ticket items and therefore weigh on sales, the latter headwinds are largely in the hands of the Trump administration in addition to next week's Fed meeting and US negotiators who will travel to Beijing next week.

Third Quarter Forecasts are here! Check out the outlook for equities, gold, the US Dollar and more.

In recent quarterly reports, Ford has highlighted the impact of higher input prices on the back of sweeping metal and aluminum tariffs. Further, the US-China trade war has muddied the outlook for sales in China and threatens to complicate the company’s supply chain. The catalog of concerns has played a role in keeping Ford shares in check since early May and could look to weigh on second quarter results. 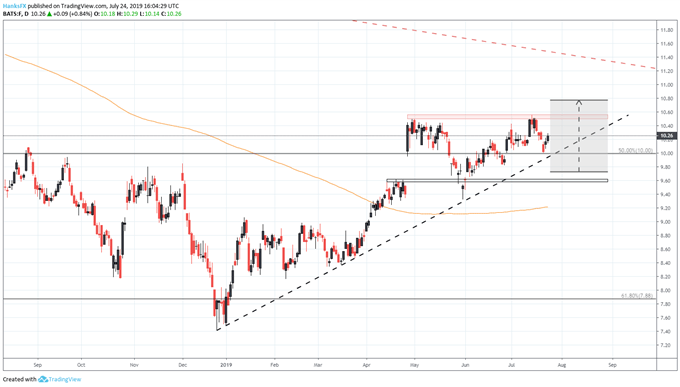 That said, confluent support at $10 will attempt to parry a move lower if earnings disappoint. To the topside, nearby resistance looks to reside at the $10.50 level which capped Ford’s share price throughout the second quarter. While the market awaits results from Facebook, Tesla and Ford, follow @PeterHanksFX on Twitter for updates and analysis on other scheduled reports.