A mixed picture across European equity markets this morning with the STOXX 600 relatively flat for the session so far. The FTSE 100 is the laggard with the gains in the Pound weighing on exporters, while mining heavyweights Rio Tinto (-4.3%), BHP Group (-4%) and Anglo American (-3.3%) have also contributed to the losses in the index. Elsewhere, the FTSE MIB is the notable outperformer as political uncertainty eased after Deputy PM Salvini stated that the government will go ahead. That said, despite dire Eurozone PMI data, the DAX has kept afloat as soft data will embolden the case for an announcement of fresh ECB stimulus at tomorrow’s meeting. (STOXX 600 -0.1%, FTSE 100 -0.9%, DAX +0.3%, CAC 40 -0.4%, FTSE MIB +0.4%)

EUR: A new ECB stimulus package is on the way and today’s weak PMI figures simply supports the case for it. German Mfg. PMI fell to a 7yr low as low export sales from China, alongside weakness in the auto sector continued to weigh. Consequently, Q3 looks to have gotten off to a soft start, therefore, the lack of inflation and growth improvement suggests that ECB stimulus is needed. The Euro had initially dropped following the news with the low 1.11s challenged, however, the currency later recovered modestly following an easing political uncertainty in Italy.

GBP: A modest reprieve in the Pound this morning with much of the gains stemming from cross-related selling in EURGBP. However, uncertainties lie ahead for the Pound, thus gains may somewhat limited until the Brexit cloud begins to clear.

Precious Metals: Both gold and silver prices are on the front foot amid expectations of further stimulus from the ECB. In the turn, this had pushed bond yields lower with German 20yr bonds now negative yielding and thus the opportunity cost for holding both gold and silver is reduced. Alongside this, silver continues to outperform gold with the gold/silver ratio once again edging lower, now at 86.2 from the peak of 93.

Crude Oil: Oil prices are slightly firmer following yesterday’s API crude oil inventory report which showed a near 11mln barrel drawdown, however, keep in mind that this would have reflected the Storm Barry impact, which led to the shutdown of 1.3mbpd of oil production. Therefore, today’s EIA is likely to be closer to the API relative to the expected 4mln barrel drawdown. Elsewhere, the Brent front month spread has moved into contango for the first time since early March, suggesting that markets may be somewhat concerned over a supply glut. 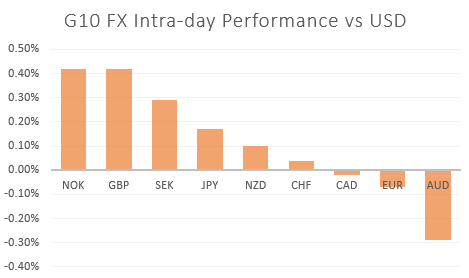