The past 24 hours were a choppy session, with varied performance in FX and equities ahead of key economic event risks such as the ECB and US GDP. Markets had to contend with mixed US earnings and data. While the S&P 500 ended the day 0.47% to the upside, the industrial-heavy Dow Jones fell almost 0.3% as it was weighed by Caterpillar Inc. (-4.48%) and Boeing shares (-3.12%) after earnings reports.

The former noted rising material costs such as tariffs while the latter confronted the possibility of halting production of a version of its popular aircraft series, the 737 Max. Meanwhile, while new US home sales missed expectations in June, they rose 7.0% m/m versus 5.1% anticipated. Overall, the US Dollar was little-changed against a basket of its major counterparts.

Ahead, the Australian Dollar could be looking at elevated volatility during Thursday’s Asia Pacific trading session. Over the past 24 hours, the sentiment-linked currency saw cautious weakness after the IMF downgraded global growth forecasts. The Aussie was also unable to find much upside momentum despite anticipation ahead of US-China trade talks in the week ahead.

After Wall Street close, Tesla published a dismal earnings report that caused shares to decline over 9% as the company cut its capital expenditure outlook. Later, reports crossed the wires early into Thursday’s session from South Korea that North Korea launched “two projectiles”. This was later confirmed by Japan. S&P 500 futures are now pointing cautiously lower which might bode ill for the Aussie.

Meanwhile, Philip Lowe, the Governor of the Reserve Bank of Australia, is expected to speak later today. Overnight index swaps are pricing in about a 60% probability of a third cut this year by October. As such, markets will be closely eyeing commentary that can either confirm or push back dovish monetary policy expectations.

Taking a closer look at the AUD/USD daily chart, the currency pair finds itself sitting right on a near-term rising support channel from the middle of June. This followed an attempt to break above long-term descending resistance from December. If the former breaks, we could be looking at another retest of channel support between 0.6827 and 0.6865 down the road. In the near-term, keep an eye on 0.6911. 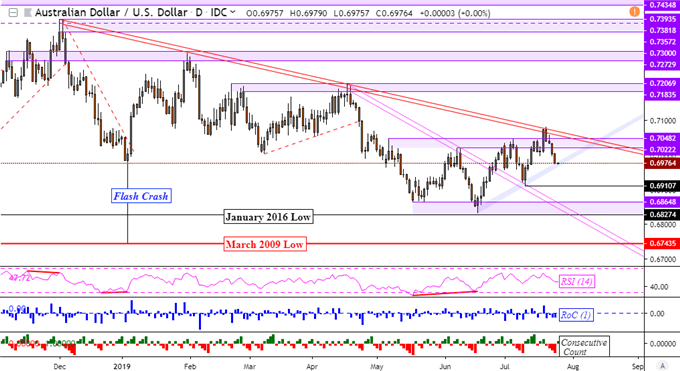