GBP: As widely expected, Boris Johnson won the leadership contest with a margin of 66%. Given that this had been priced in, GBPUSD saw a rather muted reaction to the announcement. Focus now turn towards his Cabinet picks, most notably the next Chancellor. In regard to the outlook for Brexit, the appointment has not changed an awful lot, given the lack of consensus over Brexit within parliament and with resignations from the Tory party continuing, the risk of a general election is on the rise. Amid the political uncertainty, the outlook for GBP remains fragile. Near-term support in GBPUSD is situated at 1.24.

EUR: The Euro edged towards 2-month lows following the break below the 1.12 handle. However, further downside could be curbed on the basis that expectations for an ECB depo rate cut at this week’s meeting has eased slightly (now 60/40 from 50/50). That said, gains remain limited with the central bank likely to lay the foundations for a fresh stimulus package at the September meeting.

CAD: The Canadian Dollar has extended its bearish reversal with USDCAD hitting the top of its recent consolidation range. Clean break of 1.3160 leaves room for a test of 1.32. Wider yield spreads between the US and Canada has been among the factors behind the bid in USDCAD with US/CA 10yr bond spreads widening to -60bps from July lows of -48bps. 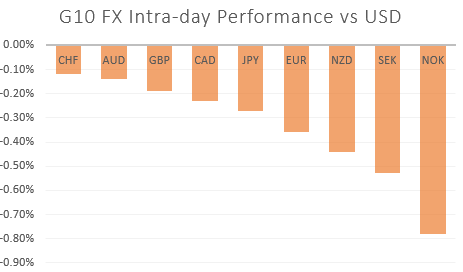