Boris Johnson is The New UK PM - What Next for Sterling (GBP)?

Boris Johnson has beaten rival Jeremy Hunt and is now set to become the new Conservative Party leader and UK PM when the current incumbent Theresa May steps down on Wednesday. Johnson won the support of 66% of the voting Conservative members. Johnson will announce his Cabinet make up over the next 24 hours which is expected to show a stronger Brexit consensus with the resignations of Chancellor Philip Hammond and Justice Secretary David Gauke – both prominent Remainers – expected imminently. Up to another 8-10 Conservative ministers are mooted to resign before Johnson receives the keys to No 10 Downing Street.

While Boris Johnson was a heavy odds-on favorite to win the leadership race, his stay in No 10 may be short-lived with a growing group of cross-party MPs determined that the UK will not leave the EU on October 31 without a deal. If Johnson finds his powers are limited, then a General Election, or a vote of no confidence, is expected later this year.

Sterling weakened ahead of the result with GBPUSD touching a low of 1.2417 before pushing back to around 1.2450. The British Pound is expected to remain under pressure against a range of currencies in the near-term, especially if the new PM ratchets up the No-Deal rhetoric. However, any placatory commentary from either the UK or the EU, especially over the contentious Irish backstop, could see Sterling regain recent losses and push back above 1.2600 in quick-time.

Boris Johnson to be Next UK Prime Minister: FTSE 100 vs FTSE 250 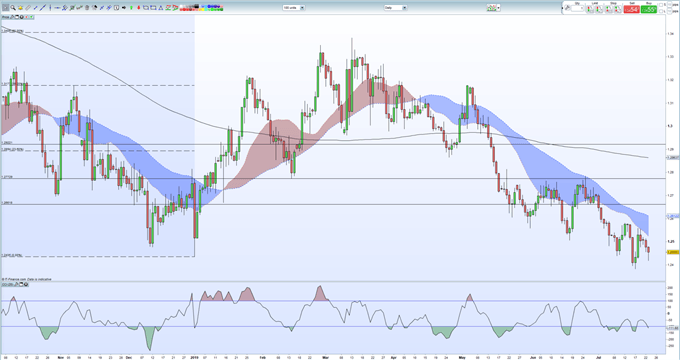 Retail traders are 75.8% net-long GBPUSD according to the latest IG Client Sentiment Data, a bullish contrarian indicator. However recent daily and weekly positional changes give us a stronger bearish contrarian trading bias.

What is your view on GBPUSD – bullish or bearish? You can let us know via the form at the end of this piece or you can contact the author at nicholas.cawley@ig.com or via Twitter @nickcawley1.