EUR/USD May be in for ECB Shock, GBP/USD Weakness Persists - US Market Open

MARKET DEVELOPMENT – EUR/USD May be in for Dovish ECB Surprise

GBP: The Pound is on the backfoot to begin the week, down 0.3% against the greenback to trade at 1.2450. As markets await the likely appointment of Boris Johnson to be the next Prime Minister, resignations from several MPs are expected to be on the way in defiance of Boris Johnson potentially heading towards a no-deal Brexit, given his recent outlook. The outlook remains weak for GBP with the next PM seemingly likely to struggle to garner some cohesion in parliament, thus the odds of a snap-election are on the rise. EURGBP back towards 0.9000, holding for now and slightly stemming the drop in GBP, key support in GBPUSD situated at 1.24.

EUR: The Euro is braced for another dovish ECB meeting, which is once again managing to hold just above the 1.12 handle. Since Draghi’s sintra speech, there has been little signs of notable improvements within the Eurozone economy, therefore making entirely possible for a potential rate cut, as soon as this week. Currently, as it stands, markets are pricing in a 50/50 chance for a 10bp deposit rate cut at the July meeting, as such, a decision to do so could see EURUSD back at the low 1.11. However, with expectations split down the middle, there is a potential for a ECB sources leak in order to sure up expectations. At the same, eyes are also on EURCHF, which trades at its lowest level since July 2017 with the cross potentially set up for a break below 1.10. While the SNB are seen to typically move in lockstep with the ECB, given that interest rates are already deep in negative territory, there may be some limits to what the SNB can actually do in response to ECB easing, thus there is a risk of a sharp appreciation in the CHF, particularly if the equity markets roll-over on continued fears over trade wars. 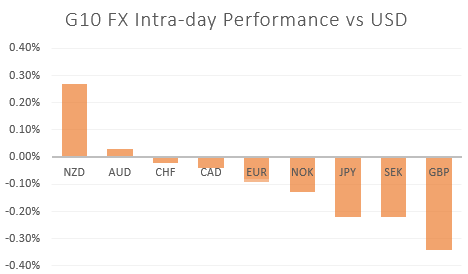