The Science and Technology Innovation Board or ‘STAR Market’ encompasses 25 listings and is reportedly aimed at addressing investors worries over governance and volatility.

Still, on a quiet day for economic data, the markets’ main focus was Friday’s Wall Street session. That saw broad losses despite a reasonable slew of corporate earnings. The capture of a British-flagged oil tanker in the Strait of Hormuz by Iran last week has stoked some risk aversion, but the story seems not to have moved on much in Monday’s session.

Japanese Prime Minister Shinzo Abe’s Liberal Democratic party maintained a majority in last weekend’s upper house elections. However, it fell short of the supermajority needed to alter the pacifist constitution which Abe would like to do. There were reported hopes that with elections out of the way, Tokyo will be able to focus on its long running political and historical disputes with South Korea

The Nikkei 225 was down 0.3%, with Shanghai’s Composite off by 0.6%. Australia’s ASX 200 reversed initial gains which were largely driven by the gold and energy sectors. It was down by 0.3% as its close approached.

US Dollar Gets Risk Off Support

The US Dollar was well supported as investors looked ahead to this week’s crucial US growth data. USDJPY crept back into the trading range which has been important since late May. That said it doesn’t look very comfortable there and the bulls have yet to take the pair back above the psychologically important 108.00 handle. 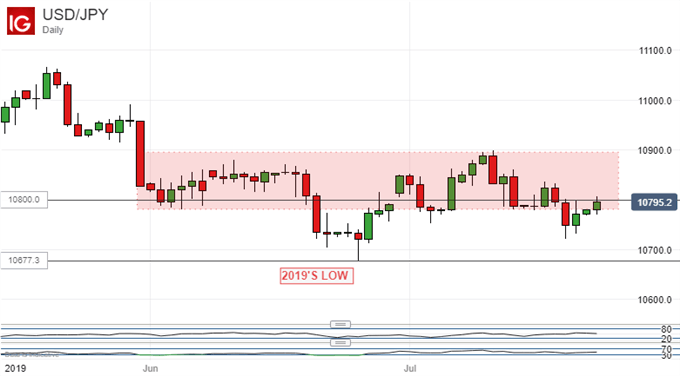 This week promises some major economic news. That US growth data is of course out in front, but the European Central Bank’s monetary policy is coming up too. There’s not much left on Monday’s schedule though, with Bank of Japan Governor Haruhiko Kuroda’s speech in Washington the likely highlight.