GBPUSD Outlook: Volatility Begins to Awaken as Brexit Risks are Priced In

GBP Volatility Will Come Back, Options Beginning to Price in Brexit Risks

Since the Brexit extension from the end of March to October 31st, implied volatility in the Pound had crashed to near 5-yr lows. However, with Boris Johnson likely to be announced as Prime Minister next, expectations are now for a tougher Brexit stance between the UK and EU. In turn, demand for options is beginning to rise as investors begin to price in Brexit risks ahead of the October deadline. This has been observed in the rise in premium for 3-month options, which suggests that the market is expecting the Pound to be increasingly volatile in the run up to the October deadline and will likely continue to increase as the tenor covers the exit date. Since the lows in July, implied vols have jumped over 2 vols from 6.475 to 8.85, which marks a 36% increase in the price in 11-days. However, this does remain heavily below highs of 15 vols ahead of the first deadline. 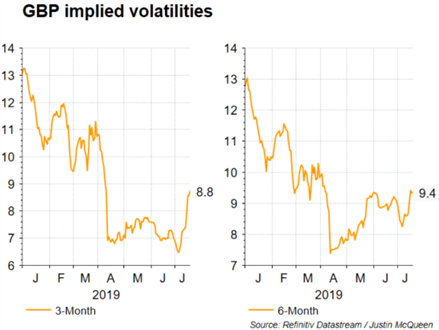 GBPUSD Has Been the Cleanest Way to Trade Brexit Risks

Since the UK referendum sentiment regarding Brexit has been expressed most clearly through trading GBP, which since the peak in May has been dropped over 5%. Of course, this has not solely been down to Brexit, factors have included a dovish shift from BoE Governor Carney, alongside weak economic data, prompting GBPUSD to fall to a fresh 27month low having briefly dipped below 1.24.

How are Markets Positioned for GBP?

Given the factors mentioned above and with the Brexit noise beginning to increase once Boris Johnson is announced as the next Prime Minister, risks continue to remain tilted to the downside for GBP. This has also been reflected in speculative positioning, which shows that markets hold sizeable net shorts in GBPUSD (-29.5%). However, while shorts maybe at 2019 highs, this is still some way off highs in 2018 (-34.5%) and the record high in 2017 (-43.4%), suggesting that current levels are not extreme, thus there is room for speculators to add to their bearish positions. 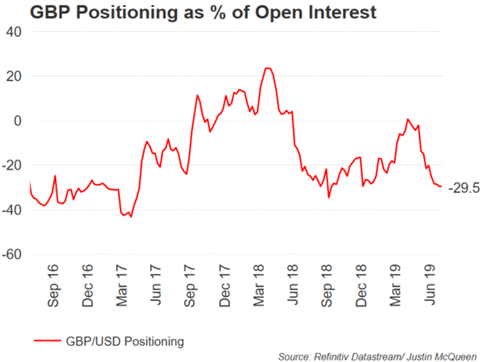