Sterling (GBP) has suffered another plunge as the currency was trading notably lower against all other majors at the start of European trading on Wednesday morning. GBPUSD remained mostly unchanged in the overnight session but suffered a 36-pip loss in the first hour of morning trading, down to levels not seen since April 2017, before bouncing back ahead of UK inflation figures being released. The drop could have been led by the ongoing tory leadership race as front-runner Boris Johnson seems set to go through with a no-deal Brexit if the EU does not ditch the Irish backstop, diminishing investor confidence in the British currency. GBPJPY also followed suit by shedding 42 pips before fully correcting the drop and bouncing back higher to 134.402.

Consumer level inflation in the UK picked up slightly in the month of June after May saw a small dip led mainly by the fall in airline and car prices. The June figure for core inflation,which excludes volatile prices for food, energy and alcohol, came in at 1.8%, up from 1.7% and in line with expectations. Headline inflation remained unchanged at 2%. At the producer level, output prices grew 1.6% in June, its lowest rate in 33 months, down from an upward revised growth of 1.9% in May and below expectations of 1.7%. Input prices fell 0.3% in the year to June, negative for the first time since June 2016, whilst the monthly change in prices was -1.4%, showing that prices for materials and fuels used in the manufacturing process are falling, mostly due to the contribution from crude oil, but the price for goods leaving the factory are increasing. Input inflation is more volatile than output inflation as it is driven mostly by commodity prices and is also sensitive to exchange rate movements, as roughly two-thirds of the inputs into the UK manufacturing sector are imported. 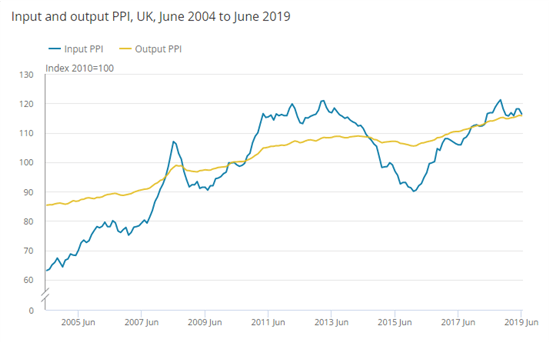 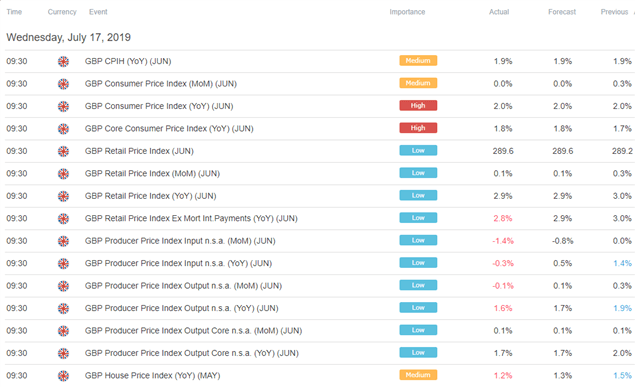 Despite consumer inflation remaining mostly in line with the target, the need to hike rates has mostly disappeared as the BoE has aligned their forward guidance with other Central Banks that keep on turning further dovish. With trade war concerns resurfaced after Trump said that the US and China have a “long way to go” and that he could apply further tariffs on Chinese goods most Central Banks remain weary about their future growth outlooks, starving off the need for rate hikes even if domestic data is performing well. On top of global tensions, the UK also has ongoing political tensions within its borders as Boris Johnson is likely to become the new Prime Minister and seems to have no intention of backing off from a no-deal Brexit despite numerous warnings of how it would harm the British economy.

A final reading for EU inflation showed an upward revision to both core and headline inflation. Prices rose 1.3% in the 12 months to June, revised upward from 1.2%, and the monthly change was revised higher to 0.2% from 0.1%. Monthly core inflation was revised upward from 0.3% to 0.4%. But despite the better than expected readings, inflation in the Eurozone still remains well below the ECB’s target of 2%, increasing fears of possible deflationary pressure.