The Nasdaq 100 closed Wednesday trading -0.48% lower after mixed results from a few large corporations like Bank of America and United Airlines weighed on earnings season sentiment. On top of the varied reports, President Trump warned tariff hikes are on the table – rattling investor confidence. Heading into Thursday’s session, the Nasdaq 100 is likely due for a continuation lower after disappointing earnings from Netflix. 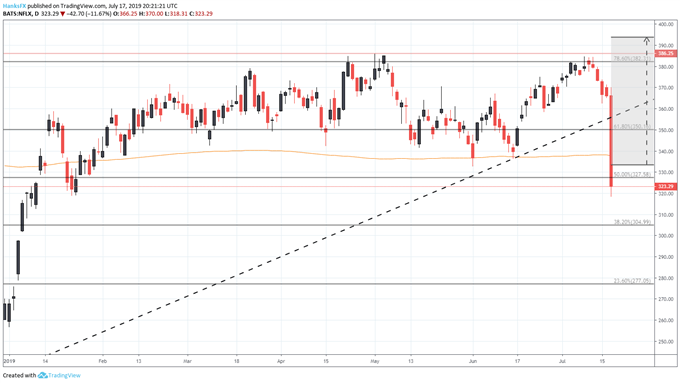 The streaming-giant split expectations from a top and bottom-line perspective, beating on earnings while slightly missing on revenue but the real damage was dealt when the company failed to add its forecasted number of new subscribers for the quarter.

Despite a projected addition of 5 million paid accounts, Netflix delivered only 2.7 million in Q2 as domestic accounts declined by 126k. The lack of growth is particularly concerning ahead of a flurry of new entrants – like Disney – to the industry. That fact was not lost on investors and NFLX shares reacted accordingly, trading 12% lower in the after-hours session and shattering the earnings implied price rangealongside the 200-day moving average.

That said, there are some reports due that could stem the expected bleed in Thursday trade. First up, Morgan Stanley (MS) is scheduled to report before the open. As one of the final large banks to report, common themes have had the opportunity to emerge across the industry which could explain the rather subdued implied volatility for the stock. At just 3.2%, the implied price range encompasses the 200-day moving average beneath and recent topside resistance around $44.80. 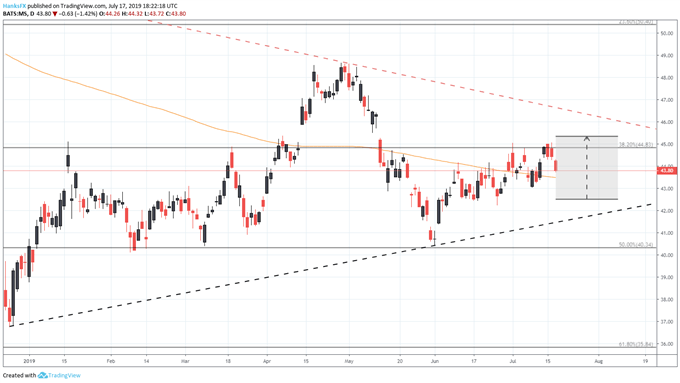 Next is the Dow Jones heavy-weight UnitedHealth Group (UNH). As Boeing (BA) flounders amid 737 Max issues, UNH is gaining ground on the plane-maker’s control over the Industrial Average and is now responsible for 6.6% of the Index. As a component of the healthcare sector, one-day implied volatility is muted at 2.5%. That said, an encouraging report could propel UNH to probe recent highs around $271. 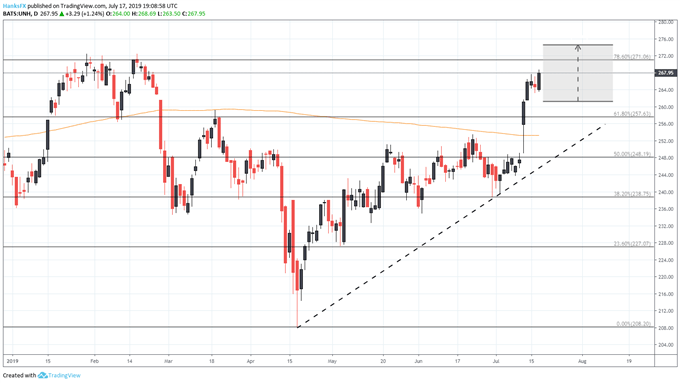 Finally, Microsoft has enjoyed a relatively unabated climb in recent months, boasting a 36% return in the year-to-date. As the largest publicly traded company in the world by market capitalization, MSFT is afforded considerable influence over the Nasdaq 100, Dow Jones and S&P 500. It accounts for 11.1%, 3.4% and 4.2% of each index respectively. By comparison, NFLX accounts for just 1.8% of the Nasdaq – the index on which it carries the most weight.

While Microsoft may not be a FAANG member, it effectively plays the same role but would muddy an otherwise catchy acronym. With that in mind, price action for the tech giant should be watched closely as it can sway the entire Nasdaq 100 and has the potential to right the ship after Netflix’s miss. 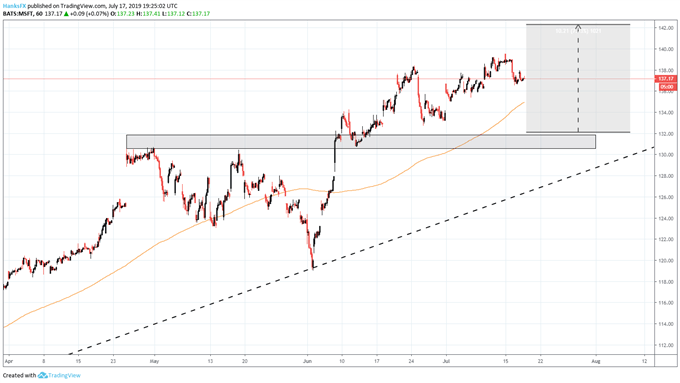 As the market awaits Microsoft, it would be reasonable to assume Netflix will weigh on the Nasdaq in the interim. That weight could drive the Index to test nearby support around 7,855 – the confluence of prior all-time highs and an ascending trendline from mid-June. Should this level fail, subsequent support is lacking until the 7,750 area. In the meantime, follow @PeterHanksFXon Twitter for updates and analysis on key themes and price action as earnings season unfolds.