The S&P 500 closed Tuesday trading -0.38% lower after mixed earnings from the big banks and healthcare giant Johnson & Johnson (JNJ). Impressive retail sales also clouded the Index’s outlook as the odds of future rate cuts was called into question – although pricing reveals the market remains nearly certain July’s meeting will be joined by a 25-basis point reduction to the Federal Funds rate. As Wednesday trading approaches, equity traders will shift their focus to Bank of America (BAC), PNC Financial Services (PNC) and Netflix (NFLX).

Scheduled to report before the open, Bank of America shares trade around $29 ahead of their quarterly results and rest narrowly above a nearby Fibonacci level at $28.85. Options-derived implied volatility suggests BAC shares could trade as high as $29.98 or as low as $28.31 following the report. Within the implied price range exists ascending support from December – which enjoys proximity to the 200-day moving average. If Bank of America is to follow their industry peers that have already reported this week, investors may expect subdued trading revenue due to poor market conditions. 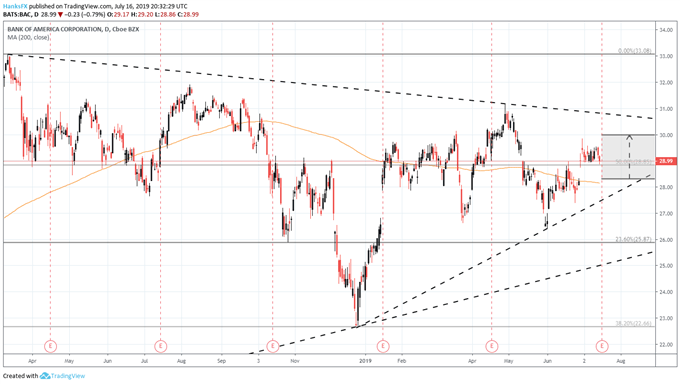 To that end, PNC may find itself in a similar situation. Trading profits have been deteriorating across the industry and concerns have arisen regarding a lower Federal Funds rate weighing on margins. Perhaps due to their relative size, PNC shares are expected to be more volatile than Bank of America – albeit slightly. The elevated volatility has expanded the earnings implied price range to include two Fib levels and an ascending trendline. Recent price action suggests each of the levels carry technical influence which could see PNC shares trade between $136 and $142.50 despite the larger implied range. 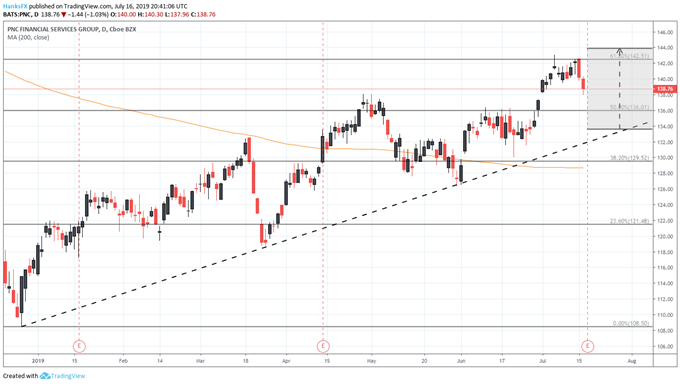 As the first FAANG member and leading tech company to report, Netflix’s earnings will be widely watched as an early indicator of tech sentiment in earnings season. Given its industry and price to earnings multiple, implied volatility is expectedly higher than the financials.

With an earnings-implied volatility of 8.43%, the resultant price range could see NFLX trade anywhere from $335 to $398 – an area that encompasses multiple technical levels. To the topside, resistance looks to reside at $382 and $385 which have effectively capped the share price in the year-to-date. A bullish break above these levels could open the door for a continuation higher. 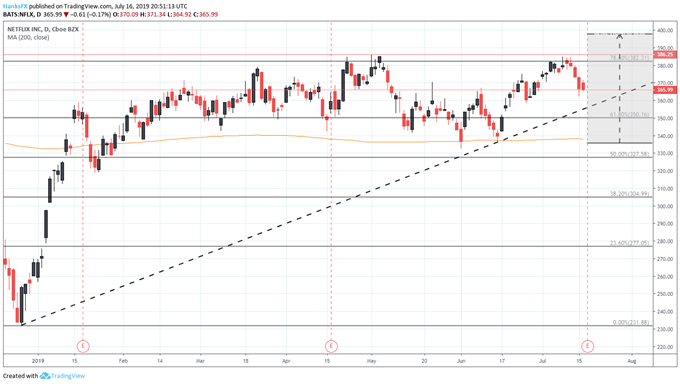 On the other hand, support is apparent near the $360, $350 and $338 levels. Each possesses varying degrees of influence, but the nearer forms of support could be quickly dispatched of given the risk and volatility that accompanies an earnings event. That said, the more robust technical support could be critical given the fundamental headwinds offered by the flurry of new entrants to the streaming space. Follow @PeterHanksFXon Twitter for updates and analysis on key themes during earnings season.