Last week’s modest rebound in GBPUSD from asix-month low of 1.2438 is under pressure, despite the run of five higher lows remaining intact. Sterling traders will be looking at this week’s UK wages, jobs and inflation data for an update on the health of the UK economy after warnings earlier this month from BoE governor Mark Carney that global trade tensions could be more persistent and damaging than previously expected. Carney also warned of the widening gulf between market and the Bank of England expectations on interest rates, raising expectations of an interest rate cut later this year.

While UK data will be the primary driver of Sterling this week, traders should also factor in any moves in the Conservative Party leadership contest, with voting ending on Sunday, July 21. Recent polls show Boris Johnson holding a commanding lead over Jeremy Hunt. The latest odds from bookmaker Paddy Power have Johnson at a prohibative 1/33 to become the next Conservative leader compared to a generous 14/1 for Hunt. The first candidate to receive more than 50% of the 160,000 Conservative membership votes will be declared the new leader.

The daily chart shows the recent run on higher lows under pressure, weakening the short-term outlook for GBPUSD. Any upside movement is likely to be capped by the 50-day moving average, currently around 1.2646, although a gap on the July 2 candle between 1.2602 and 1.2630 may interest bullish GBPUSD traders. 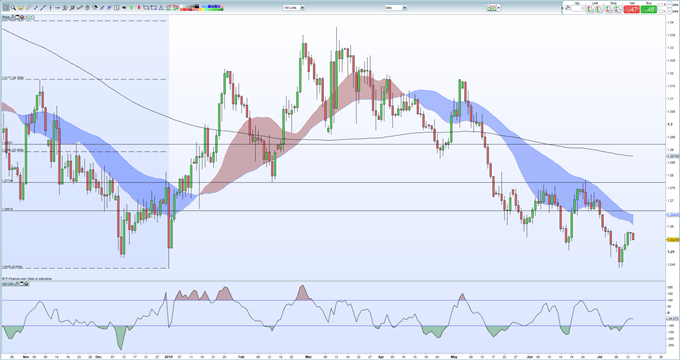