Asian stock markets managed gains despite the deceleration of Chinese growth to its slowest for 27 years.

Official second quarter Gross Domestic Product expanded by 6.2% compared to the same period. This was exactly as forecast, limiting any ‘shock value.’ There was also some relief in data released at the same time showing stronger than expected gains for retail sales, industrial production and fixed asset investment for the month of June.

There remain dark clouds over the Chinese economy. Trade problems with the US are unresolved, manufacturing is contracting while inflation is rising, and the authorities will not want to further stoke already vast corporate debts with lower borrowing costs. Still, markets took Monday’s numbers overall as an upside surprise, with equities up 0.8% in the middle of the Shanghai afternoon. Hong Kong’s Hang Seng had added 0.2% while the ASX 200 was down 0.4%. Wealth manager AMP’s shares fell more than 15% after the company reportedly called a sale of its life insurance business ‘highly unlikely.’ Japanese markets were closed for a holiday break.

The US Dollar held near ten-day lows against a basket of its most widely traded rivals. The foreign exchange market seems pretty sure that US interest rates will be heading lower soon. The Australian Dollar meanwhile made gains in the wake of that Chinese growth news and managed to build on them through the session.

AUDUSD bulls have managed to keep the bounce from 2019 lows seen in mid-June very much alive. 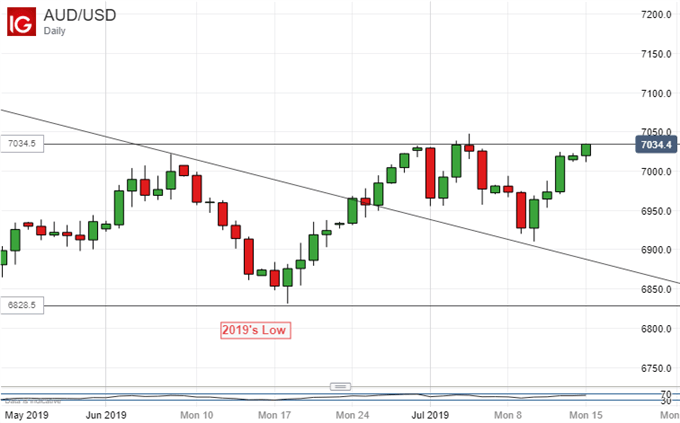 The pair is now threatening to top its previous significant peak, despite just having endured the first back-to-back monthly interest rate cuts since 2012. For the moment the US Dollar seems to be driving most of the action here, and focus will probably return to the Aussie’s own lack of interest rate support soon enough. All the same, there may be less scope for still-lower Australian borrowing costs in the coming months than the market thinks.

The rest of the global session won’t offer markets much of huge interest, with Tuesday’s US retail sales figures probably the next major hurdle for investors.