USD: Fed’s Powell signal that interest rates will be cut at the upcoming meeting (July 31st) has continued to put the greenback on the back-foot against its major counterparts, while US indices extend on its record highs. While Powell is due to speak for a second day at Capital Hill, it is likely to be a reiteration from yesterday’s commentary. That said, with a July rate cut cemented, the focus now is whether the central bank expects further rate reductions going forward. Although with the latest CPI showing an upward surprise in the core figures, questions may be raised as the whether the Fed signals further easing is needed, thus the USD has seen a marginal bounce since the CPI report.

GBP: In recent sessions, the sentiment in the Pound has deteriorated and rightly so, given that recent data has softened, while BoE officials have grown more cautious. However, with the market increasingly bearish on GBPUSD (reminder, CFTC data shows speculators are the most bearish on GBP in the G10), yesterday’s drop in the USD looks to have sparked a short squeeze in the pair, which trades above 1.2550. Topside resistance situated at 1.26.

CAD: Firmer oil prices and a central bank that is willing to sit on the side-lines relative to its dovish counterparts, has seen the Loonie continue to outperform with USDCAD once again edging towards its 2019 lows of 1.3037.

EUR: The latest ECB minutes provided little in the way of fresh news given Draghi’s Sintra speech. Consequently, the Euro was relatively unchanged following the release with focus now on the upcoming data ahead of the July 25th monetary policy meeting. 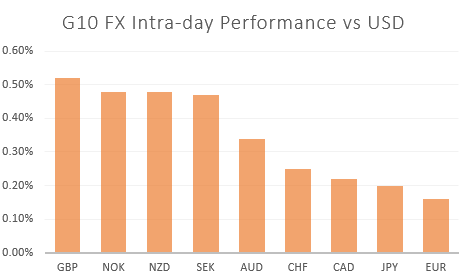