Oil prices soared well over 3% on Wednesday to close at $60.23/bbl. Bullish crude oil price action came in response to a mix of fundamental developments which look to boost demand prospects and further curb supplies. The steep ascent over the last 24 hours was initially sparked by API crude oil inventory data released yesterday which revealed a drawdown of -8.129 million barrels. 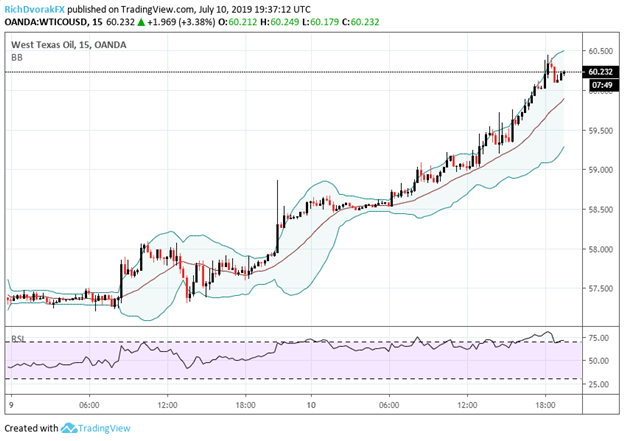 Upward momentum continued when Fed Chair Jerome Powell delivered his prepared remarks for his congressional testimony. Powell reiterated the Fed’s dovish position and that the central bank stands ready to “act as appropriate to sustain US economic growth.” The potential that an ‘insurance’ rate cut by the Fed will help keep the US economy and global GDP growth on track is likely boosting oil demand prospects and crude oil prices. 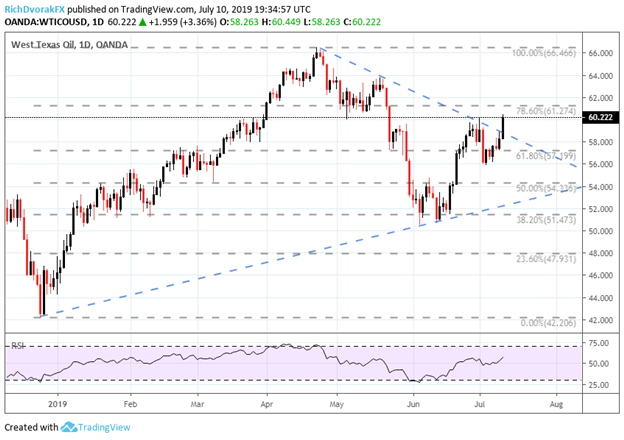 Upside in crude oil was subsequently exacerbated by comments from US President Trump who stated that sanctions on Iran – the world’s 7th largest oil producer– will soon be increased substantially. Furthermore, speculation over the adverse impact on crude oil production in the Gulf of Mexico is likely contributing to the push higher in crude oil prices as commodity traders weigh the threat that brewing Hurricane Barry poses to US oil infrastructure on the shores of New Orleans.

This push higher in crude oil prices today appears to have broken bearish downtrend technical resistance from the string of lower highs since oil topped out around $66.00/bbl back in April. Crude oil could run into another level of technical resistance, however, near the 78.6% Fibonacci retracement level of the commodity’s bullish ascent from December 2018 to April 2019. Meanwhile, retail traders are growing less optimistic over crude oil price action as suggested by IG Client Sentiment data. 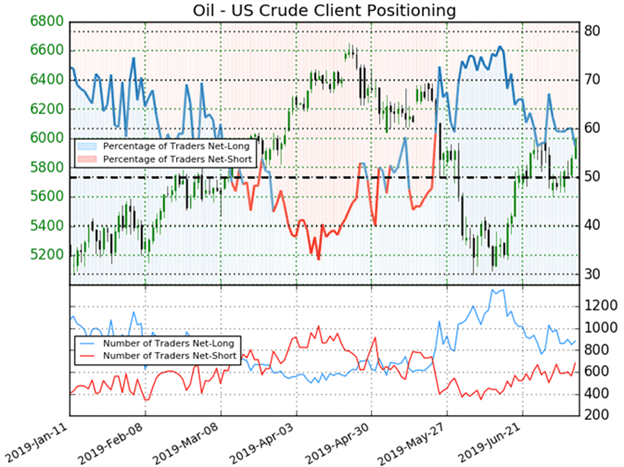