The S&P 500 crossed the 3,000 mark for the first time ever on Wednesday as Federal Reserve Chairman Jerome Powell signaled a willingness to cut the Federal Funds rate. The prospect of lower borrowing costs has spurred optimism that corporate earnings will rebound and help to extend the current period of economic expansion. With Wednesday’s commentary and trade wars on hold, fundamental themes have paved the way for fresh all-time highs. 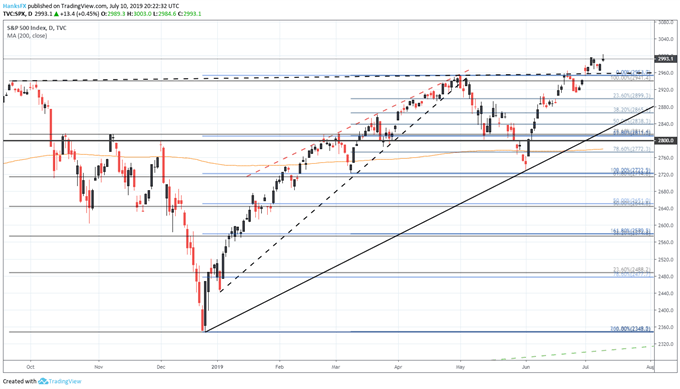 At present, the path of least resistance for the S&P 500 is higher as the Index enjoys nearby support around prior peaks at 2,954. Similarly, the Dow Jones enjoys open-air above as the Industrial Average looks to capitalize on strength of its own. With FOMC minutes in the rearview, stock traders will now look to the arrival of earnings season next week when the big banks and some FANG members look to report their quarterly results. In the meantime, Delta Airlines (DAL) is slated to report their earnings before Thursday trading. 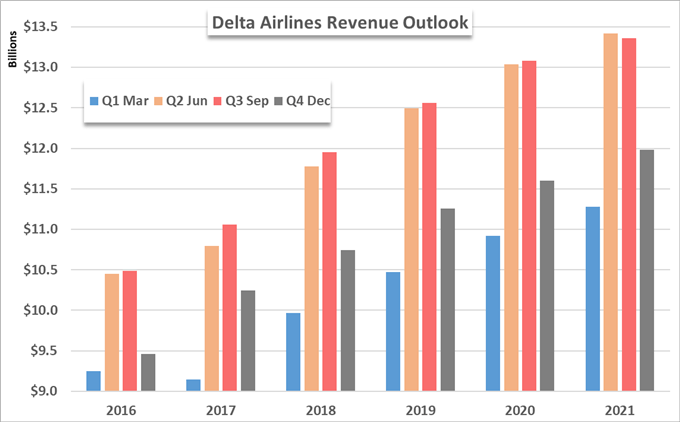 As the only major American airline not affected by the grounding of Boeing 737 Max models, Delta has already exhibited strength relative to its industry peers. That said, earnings for the quarter may highlight this fact as DAL looks to skim market share from other travel providers. The price target consensus among Wall Street analysts is $67.40 – a 13% return from the current price. Further, data from Bloomberg reveals insiders have increased their holdings of the stock by 20% in the past six months. 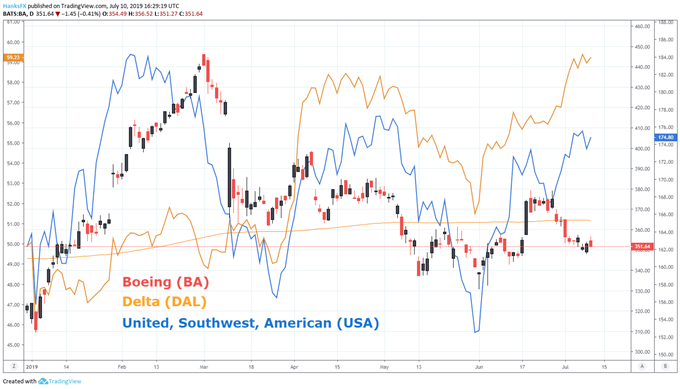 Given the stock’s industry, earnings-implied volatility is understandably moderate at just 3.47%. Therefore, the implied price range in Thursday trading is just $4, from roughly $57.3 to $61.5. Over the next 20 days, volatility is heightened at 14%. Although the implied range is narrow, it encompasses the stock’s all-time high and nearby support – two levels that will play an important role in the impending price action.

To the topside, Delta will look to surpass recent record highs posted in November 2018 around $61.35. In the event of an earnings beat and bullish price reaction, the level will pose resistance if DAL attempts to push beyond to fresh highs. Should $61.35 be dispatched of, it would open the door for the stock to probe street consensus at $67.40. 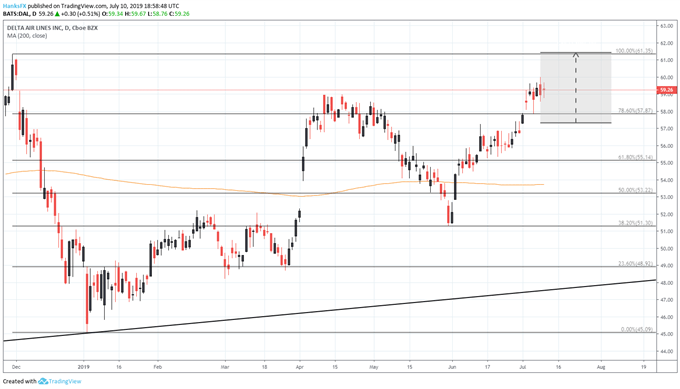 Conversely, if Delta reveals earnings beneath, or on target, support will look to reside at $57.87. Given Delta’s current competitive advantage, expectations are likely skewed to the topside as analysts look for the airline to exploit groundings among direct competitors. For example, Southwest (LUV) operates the most 737 Max models in the United States with 34 jets, whereas DAL does not fly the model altogether. Follow @PeterHanksFX on Twitter for further commentary on DAL and other earnings previews as the season progresses.