June’s official Consumer Price Index rose 2.7% on the year, the same rate as seen in May. Factory gate prices were flat, however, with the Producer Price Index change down to 0.0%, from 0.6% the month before.

Both measures showed contraction on the month, but inflation is probably not high on Chinese policy makers’ worry list right now. The Ministry of Commerce said last month it expects the CPI rate to top out at around 2.9% in September or October, these data chime with that. It sees the effects of higher fruit and pork prices as temporary and has targeted inflation at ‘around 3%’ this year.

The more pressing tale in this release may actually be those PPI numbers. Chinese industry is suffering from both trade tensions with the US and tepid demand at home. However, with consumer prices developing broadly as Beijing expects, scope for more stimulus would appear limited.

The Australian Dollar often finds itself cast in the role of favored China risk proxy given its home nation’s huge raw material export links with the world’s number two economy. However, at present it seems likely that interest rate differentials with the US are a much more prominent AUDUSD driver. It certainly didn’t move much on the Chinese data. 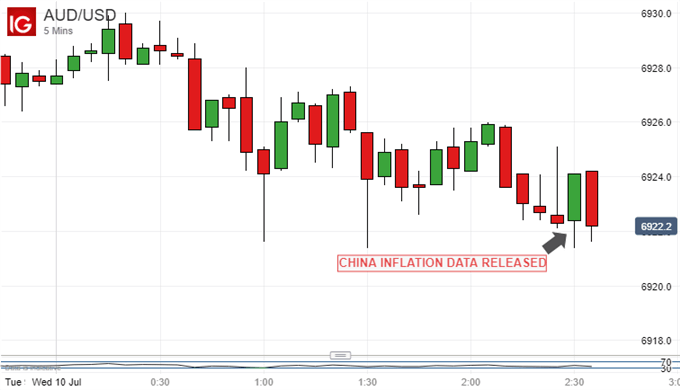 This market like others is transfixed by Wednesday’s scheduled Congressional testimony from Federal Reserve Chair Jerome Powell.

On its daily chart the Aussie had gained into July as markets moved to price in some monetary easing from the Federal Reserve, only to fall back again as last week’s strong labor data forced a rethink. 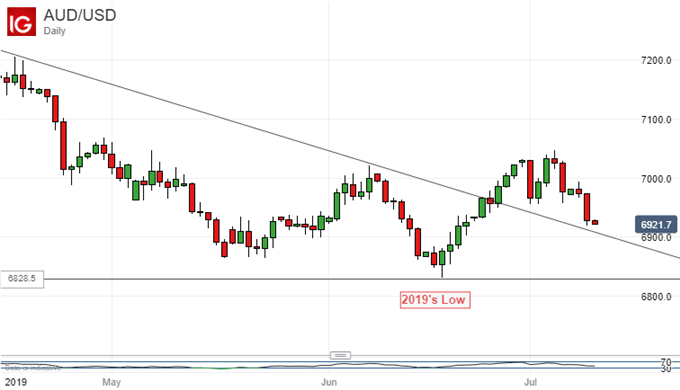 For its part the Reserve Bank of Australia has just completed the first back-to-back monthly interest rate cuts since 2012, taking the Official Cash Rate down to a new record low of 1%. Even if the bar to further reductions here is higher than the market thinks, the Aussie clearly lacks monetary support of its own and the reassertion of that fact is likely behind the clear approach to AUDUSD’s former downtrend.