Asia Pacific stocks were lower Monday with the re-pricing of interest rate expectations in the US weighing them down. That came about in turn thanks to strong employment data released at the end of last week, which saw market forecasts of two, quarter point cuts to the Fed funds target rate in the near future reduced to just one.

Global investors hope for more clarity on this crucial issue this week. They’ll hear from numerous Federal Reserve luminaries including Chair Jerome Powell. He’ll testify before the House Financial Services Committee on Wednesday and the Senate Banking Committee on Thursday.

A modest local dampener on equity markets came from South Korea and Japan. A dispute between the two over wartime forced labor has expanded to the point where Japan imposed tighter restrictions last week on the export of high-tech materials used in displays and smartphones made in South Korea. The Kospi shed more than 1.5% with Samsung especially hard hit.

In Japan the Nikkei 225 dropped 1%, with Australia’s ASX 200 down by a similar amount. The Shanghai Composite fell 2.5%.

The US Dollar meanwhile rather enjoyed the Fed re-price. Bulls took it back to near three-week highs at the start of the session against major traded rivals, but it returned some of these gains as the Asian session wore on.

USDJPY has edged back up into the old trading range which formerly endured between May 31 and June 20. 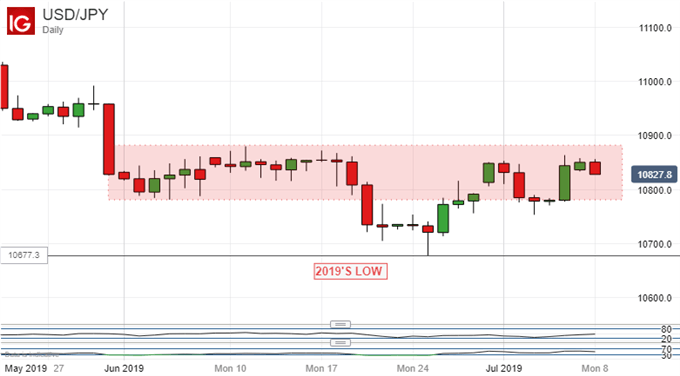 Clearly however one daily-chart foray toward the range top has already failed and another one seems likely to, putting focus on the base at 107.82.

Crude oil prices went nowhere very much in Asian hours and DailyFX Senior Currency Strategist Ilya Spivak suspects the week’s action will crowd around that Powell testimony and the release of Federal Open Market Committee monetary policy meeting minutes from last month, which is coming up on Wednesday.