After months of uncertainty, clarity has emerged regarding the next European Central Bank president. With German Chancellor Angela Merkel able to use her waning political capital to nominate German Defense Minister Ursula von der Leyen to become the next president of the European Commission, the Eurozone’s second largest economy, France, was able to place one of its own among the next class of EU leaders – and in turn, perhaps securing the most important job in all of Europe: the presidency of the ECB.

The Next ECB President is...Christine Lagarde

Former French Finance Minister and current International Monetary Fund Managing Director and Chairwoman Christine Lagarde has been tapped to replace Mario Draghi as the next ECB president. The move comes as a complete surprise to market participants, who up until the past few days did not have Lagarde on their radar as a top contender to succeed Draghi as the next ECB president.

Even though the nomination does not guarantee ascension, all signs point to Christine Lagarde being confirmed as the next ECB president. In recent months, in her capacity as IMF Managing Director and Chairwoman, Lagarde slashed the IMF’s global growth forecasts, describing the situation as a “delicate moment” the global economy. One can read between the lines and see that she was talking about the collateral damage of the US-China trade war.

To this end, with Eurozone growth flagging and inflation expectations sagging, it would appear that Lagarde will be primed to take the reins from Draghi and continue the accommodative policies of ultra-low rates and asset purchases if necessary (Draghi has talked up the possibility of more stimulus in recent weeks). Decrying the lack of fiscal reform over the past several years, Lagarde is very familiar with the need for the ECB to remain active on the stimulus front. Accordingly, any hopes that the next ECB president would end the era of accommodative policies (i.e. a Jens Weidmann-type) have been dashed. 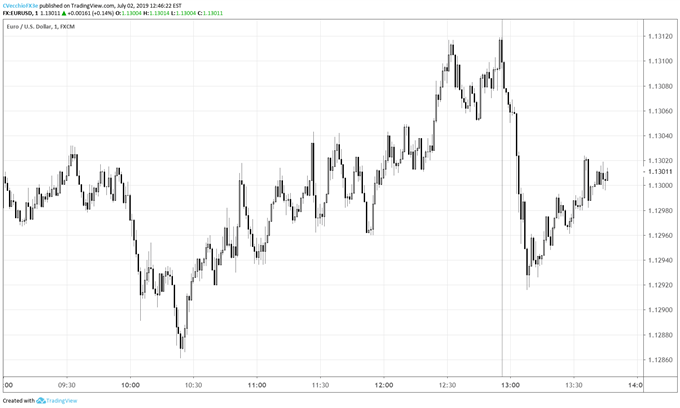 Amid the flurry of nominations for the next class of EU leaders, the Euro pulled back quickly from its daily highs. EUR/USD dropped from 1.1312 to as low as 1.1292 over a 15-minute period, before rebounding back to 1.1301 at the time this report was written. Elsewhere, with US equity markets under pressure and US Treasury yields falling, the Japanese Yen was able to take advantage of the shift in news f;ow, with EUR/JPY sliding to its lowest levels of the day following the reports.