Just as international trade seems to be at a breaking point the EU has defied the threat to global growth by stepping up the amount of trade deals it has in place with various countries around the world. Even though Donald Trump and Xi Jinping emerged from a trade meeting on Saturday at the G-20 meeting in Osaka with a plan to continue talks in the future, the fact is that high tariffs are still in place and they threaten to disrupt world trade and global economies, so the EU has decided to do something about it.

As trade tensions reached a boiling point in the second quarter of 2019 with the US increasing tariffs on Chinese and Mexican goods and threatening to do so against a host of other countries, of which the EU is included, the European bloc has stepped in to sign various trade deals with countries around the world, with the latest being with Latam bloc Mercosur after more than 20 years of negotiations.

As the EU achieved trade deals with Mexico and Canada in 2018 and has a range of deals being drafted up to be in place by year end there is the possibility that the US could face increased pressure to scale back the extent of its proposed tariffs. If the EU leads the way to achieve free movement of goods with other countries around the world, the reliance on the US for world trade could be diminished, and Donald Trump’s protectionism efforts could be reduced. Regardless of the intended outcome the EU showing the US that world trade can continue to thrive despite their continued efforts to disrupt it.

It started in February with Japan in a trade deal dubbed as “cars for cheese” where barriers to trade were opened and almost all tariffs were dropped between the two countries. The deal reduced nearly €1 billion of EU tariffs, mostly on European agriculture products, and a reduction of the 10% duties on Japanese car imports to 0 by 2027. The deal eased some of the downward pressure experienced worldwide on the back of continuing Chinese and US trade tensions as the US faced retaliation. The deal led to US products that were bought by Japanese or EU consumers being replaced by cheaper imports from the other country in the trade deal. This meant that EU consumers could now buy cheaper Japanese cars, possibly reducing the import of US cars to the EU, and vice versa with most agricultural products from the EU replacing US products being shipped to Japan. At the time of the deal, European Commission president Jean-Claude Juncker described the pact as “a message to the world about the future of open and fair trade” and provided some relief to markets worldwide in the midst of escalated Sino-American trade tensions.

But relief was short-lived as in mid-May escalated trade tensions between China and the US culminated in increased tariffs being implemented by both countries, which put markets in a downward spiral, and with EU facing a slowing economy and struggling to keep inflation close to its 2% target the prospects of successful alternative trade deals was not very promising.

But with the threat of US tariffs being imposed on about $11 billion of EU goods, the European Union has looked for alternative importers for its products, if only to hedge against the risk that Donald Trump may deliver on his threat. To start of the second half of the year the EU has reached a trade deal with Vietnam, the first of its kind with a developing Asian country. Although the deal still needs to be approved by the European Parliament, which could show some resistance given concerns over Vietnam’s human rights and freedom restrictions, it is the largest of its kind to be signed by the EU with a developing nation. It will look at reducing 99% of tariffs on Vietnamese and European goods with the remaining 1% reduced by quotas. Vietnam agrees to eliminate 65% of duties on EU exports as soon as the agreement comes into force with the remainder being phased out over a 10-year period, and the EU will eliminate 71% of tariffs immediately and the rest will be eliminated within a 7-year period. The EU is Vietnam’s second largest exporter, only behind the US, but the deal is expected to create more than just free movement of goods, as non-tariff services such as banking and public procurement will also benefit from the deal.

One of the biggest and most recent trade deals the EU has reached is with Latam bloc Mercosur, which encompasses Argentina, Brazil, Uruguay and Paraguay. The deal is considered to be one of the biggest the EU has done to date and defies the current rise in protectionism around the world. Despite talks between the two blocs being in place since 1999, Donald Trump’s election in 2016 and subsequent threat to free trade ramped up negotiations, leading to an agreement which will cover 780 million consumers. The EU’s commissioner of trade has stated that the deal will save European companies €4 billion in duties and will give the EU a head-start against other countries in a time when trade deals between countries other than the US will be in high demand. As a result, we saw the Brazil 60 index opening 2% higher on Monday morning, and USDBRL down 0.87%. 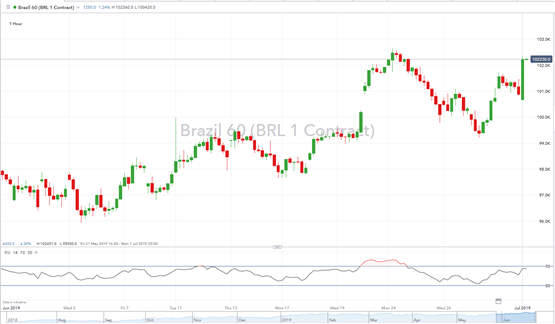 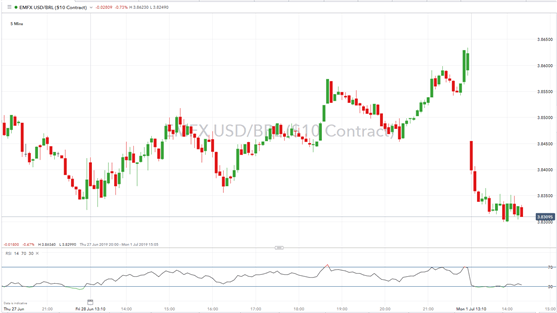