Oil: Brent and WTI crude futures are on the front foot begin the week, as a trade truce between the US and China, as well as a pledge by OPEC and Non-OPEC members to extend oil production quotas for 9-months has bolstered the energy complex. Risks remain tilted towards further upside in Brent crude futures with eyes for a test of $67.20, before a move towards $68.45 (50% fib retracement of 2018 peak to 2018 low). CAD among the key beneficiaries of firmer oil prices.

JPY & CHF: Safe-havens are notably softer this morning with both CHF & JPY falling against its major counterparts as risk on flows dominate price action. This has stemmed from the trade truce between China and the US, which has also seen US equities (S&P 500, DJIA) at fresh record highs. However, as has been evidenced by the slew of weaker than expected PMI surveys across the globe, dips in the safe-haven JPY, may become increasingly attractive with data showing a notable slowing of global growth. Eyes on ISM, which is seen dropping to a near 3yr low.

GBP: UK Manufacturing PMI fell to the lowest level since Feb’13 as the unwind of the record stockpiling continues to weigh, while weak domestic demand had also taking its toll on the sector. Consequently, this further supports the case that Q2 growth had more or less flatlined, which in turn has seen GBPUSD continue to pullback from the 1.27 handle with the sentiment remaining soft for the currency.

USD: The greenback is firmer following the encouraging trade developments, however, this is unlikely to provide a notable shift in Fed policy going forward, given that tariffs remain in place, thus growth risks are tilted to the downside. Money markets remain 100% priced in for a 25bps cut at the July meeting, however, while a 50bps cut has eased slightly, key data points showing signs of a slowdown, starting with today’s ISM report could provide the Fed with enough evidence that they need to provide a dovish surprise. 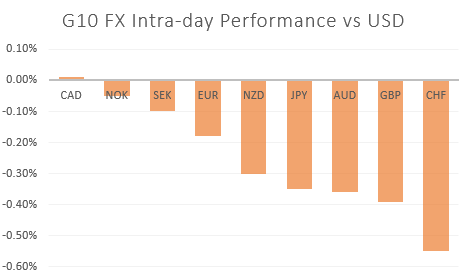