The index from Australia and New Zealand Bank (ANZ) came in at minus 38.1, for June, worse than the minus 32 print seen in May

This indicator has long been a source of anxiety to economic policymakers in New Zealand, having been stuck in negative gloom since the end of 2017. Obviously uneasy businesses don’t make big investment or hiring decisions, with lack of confidence acting as a major economic drag.

The overall activity marker was lower too, coming in at 8 when it had been 8.5 in the previous month.

NZDUSD slipped on the release, although overall risk appetite (which usually supports the Kiwi) may have been boosted just before the data by reports that Donald Trump will meet his Chinese counterpart Xi Jinping on Saturday in Osaka at the Group of 20 leaders’ summit. 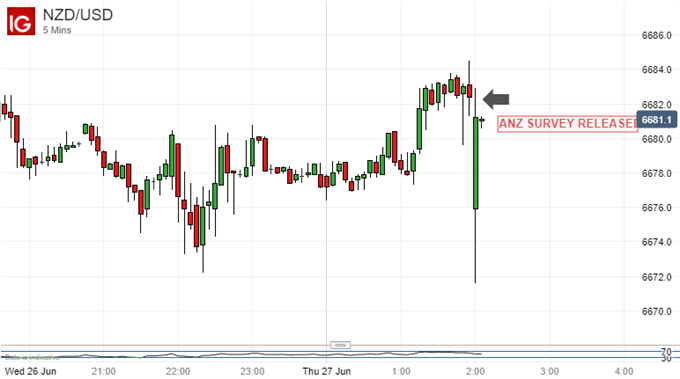 The currency pair remains well supported on its broader daily chart after an impressive run of gains. Most of those came as a result of general US Dollar weakness as global markets have moved to price in lower interest rates from the US Federal Reserve.

For its part the Reserve Bank of New Zealand left its own monetary settings alone this month, so that the Official Cash Rate remained at the 1.50% record low in place since June. It did say, however that lower rates may be necessary in the months ahead, but its statement was clearly less dovish than the market and NZDUSD continued to gain. Technically speaking NZ bulls are probably now eying mid-April’s peaks in the 0.6775 region. However the charge higher has been quite rapid and a period of consolidation may well be in order first.