The Brazilian Real and benchmark Ibovespa equity index will be closely watching today’s release of the FGV inflation report. Year-on-year price growth is expected to show 6.39 percent print, though it will likely fall short of forecasts due to the economy’s persisting weakness. The release of the Copom meeting minutes revealed that inflation expectations remain broadly tepid with expectations of a 75 bp rate cut by year-end.

The main driver of price action in Brazilian markets continues to be President Jair Bolsonaro’s pension reforms. Brazil spends over four percent more on pensions than the eight percent average found in almost all OECD countries. The bloated system continues to pose a threat to Latin America’s largest economy with fears that unless it is redesigned and written into law, a recession may ensue and put the financial system at risk. 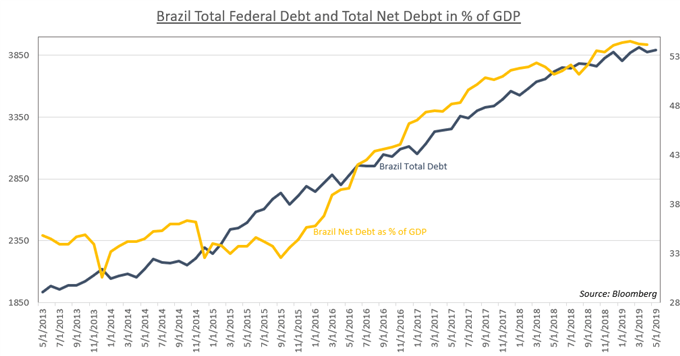 A major source of anxiety for investors is the exact timeline for votes on the pension bill. There is a motion to postpone the committee vote by five days. While the ballot was initially planned for this week, there are speculations that it could be pushed back to Monday, though this may not be a problem according to Brazilian Congresswoman Joice Hasselmann. There is no guarantee investors will necessarily be at ease with a delay.

After retreating from an 8-month high in May, USDBRL subsequently fell over six percent and may now start trading in a new range between 3.8504-3.8959 (red dotted lines). Prior to this, the pair may temporarily trade sideways within the 3.7935-3.8113 area (yellow dotted lines). However, due to the relative illiquidity of emerging market FX, BRL’s moves may be more sporadic relative to its G10 counterparts.

Furthermore, the Real’s price action since the election of Bolsonaro has been primarily tied to volatile political developments that continue to roil local financial markets. An increasingly ambivalent global geopolitical backdrop amplifies the unpredictability of the USDBRL’s trajectory because there is no telling when a flood of capital may start rushing into the US Dollar as a result of risk aversion. 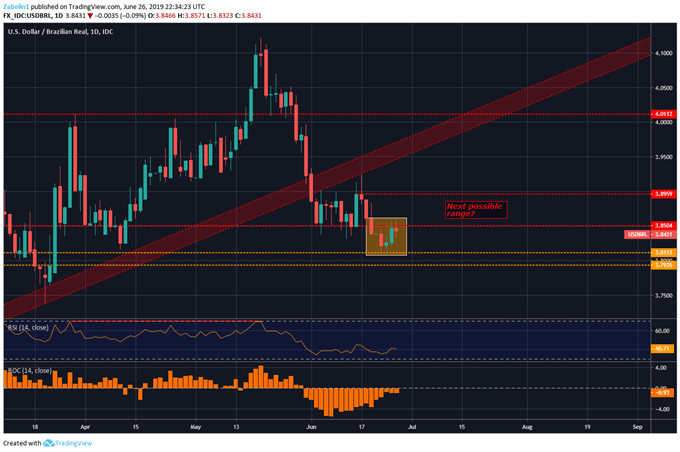