The Dow Jones surged higher at Wednesday’s open following a series of bullish events. The first of which was a surprisingly strong earnings report from semiconductor stock, Micron (MU), which I forecasted would lift the Nasdaq 100. Secondly, a series of optimistic comments from US officials regarding the state of trade negotiations ahead of this weekend’s meeting. Together, the developments helped the Dow Jones to drive at resistance near 26,700. 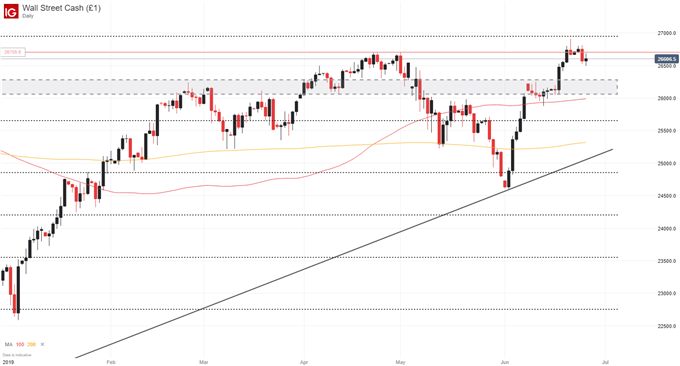 With Thursday fast approaching, the Industrial Average will look for its next catalyst and Nike (NKE) earnings could provide such a spark. Due Thursday after the close, Nike is expected to report earnings of $0.66 a share on $10.16 billion in revenue for the quarter. The retailer has expressed concern regarding the US-China trade war and a notable headwind from a strong US Dollar. Thursday’s earnings will likely provide specific metrics on the expected impact of these considerations and given the company’s size – price action is likely to spill over into other retail stocks.

That said, the combination of Nike’s size and industry result in a relatively subdued earnings implied price move at 5%. Thus, the implied price range for Nike in Friday trading is roughly $79 to $87.50 – with the stock enjoying confluent support around $80. Barring a massive disappointment, the 200-day moving average, ascending trendline and Fib level should refute any attempted moves lower. Follow @PeterHanksFX on Twitter for more technical and fundamental updates on Nike and other companies during earnings season. 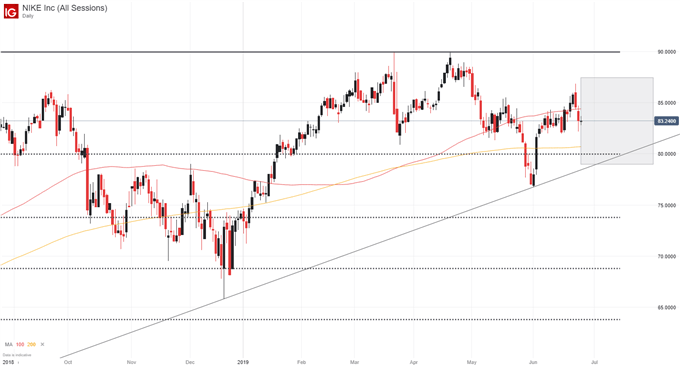 To the topside, NKE will look to surmount recent swing highs around the round $85 mark and slightly higher around $86.35. Given Nike’s weight in the Dow Jones Industrial Average (2.11%), an earnings surprise and drastic price reaction could directly influence the Index – whereas takeaways for industry peers can impact larger swaths of the US equity market as we saw with Micron on Tuesday.