The New Zealand Dollar held onto its near-term uptrend against the US Dollar after the RBNZ left rates unchanged at 1.50 percent in June as expected. Heading into the meeting, overnight index swaps were pricing in about a 25% probability of a rate cut with around a 75% chance of it happening in August instead.

With such aggressive anticipation of a rate cut in a couple of months, it appeared as though the central bank failed to significantly add fuel to those bets. On the 5-minute chart below, we can see that NZDUSD declined initially on the announcement, but it then retraced its steps and finished a little higher.

Some of this may have been due to the hold itself. According to the statement, “the Committee discussed the merits of lowering the OCR at this meeting”. Instead, they noted that a lower rate may be needed over time. As such, this likely disappointed near-term dovish expectations while failing to significantly fuel more ahead.

However, they did mention that the global economic outlook “has weakened” and that downside risks related to trade activity “have intensified”. This is likely referring to the risk of an escalation in US-China trade tensions, placing the focus for the sentiment-linked NZDUSD on this week’s G20 summit in Japan. 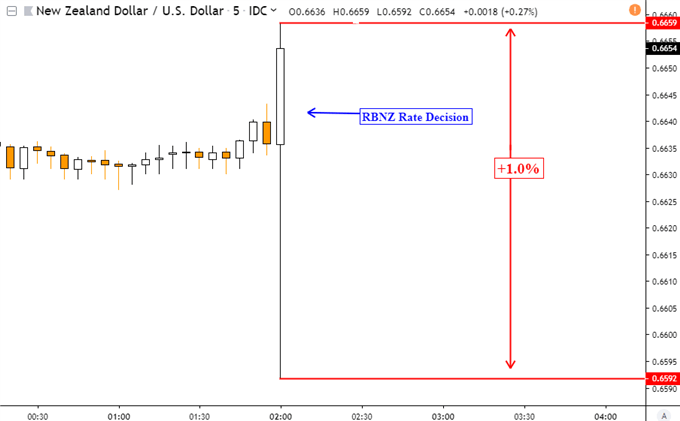 NZDUSD prices are sitting right under a key range of resistance between 0.6664 and 0.6682. This follows a retest of support at 0.6482 on June 14, paving the way for what could be a Double Bottom which is a bullish reversal pattern. If resistance breaks apart, that could be a warning sign of an extended uptrend ahead.

This is accompanied by bullish-contrarian price signals that IG Client Positioning is showing on the New Zealand Dollar. If net-long positioning continues to fade, this may exacerbate gains in NZDUSD. Join me every week on Wednesday’s at 00:00 GMT as I discuss how you can use this in your own trading strategy. 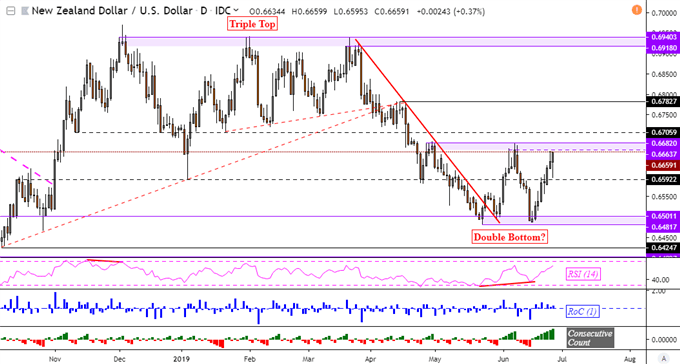