The Brazilian Real and Ibovespa found themselves swimming in a sea of red by the end of Tuesday’s trading session. The index extended an almost-two percent decline that was primarily being dragged down by Brasil Bolsa Balcoa’s 5.1 percent drop. Prior to that, the benchmark had risen by over four percent since June 18, breaking past its previous landmark-high at 100,000 points.

How Much Further Will the Decline Extend? 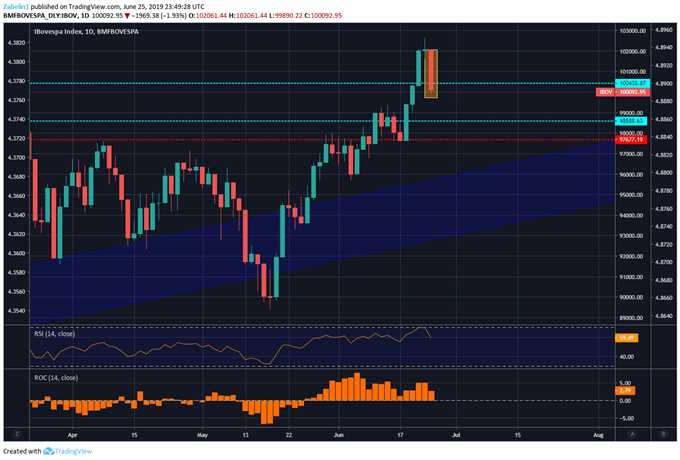 The release of the Copom meeting minutes along with conflicting news on the government’s pension reform bill almost certainly contributed to a volatile day. As anticipated, policymakers emphasized how important these structural reforms are for future inflationary pressure and growth prospects. Officials also stressed how crucial the passage of this bill is to boosting confidence and stimulating investment.

Analysts are expecting the benchmark Selic rate to be lowered to 5.75 percent by the end of the year and policymakers removed the reference to “symmetrical” inflationary pressure. The absence of such a phrase, along with commentary on the underutilization of industrial capacity and higher-than-desired unemployment suggests inflationary risks are tilting to the downside and could prompt an adjustment in monetary policy.

After the minutes were published, central bank President Roberto Campos Neto held a press conference in Brasilia where he warned of deteriorating global growth prospects and frustration with the uncertainty about the passage of the pension reform bill. He underscored the importance of how the perception of the reforms are affecting the economic outlook, expectations for future price growth and risk premium for Brazilian assets.

“[Copom members] stressed that the persistence of uncertainties regarding fiscal sustainability tend to be contractionary.”

“By reducing fundamental uncertainties about the Brazilian economy, these reforms tend to stimulate private investment. This potential expansionary effect should, to some extent, offset the impact of short-term fiscal adjustments on economic activity, as well as mitigate the risk of episodes of large risk premium increases, as witnessed in 2018.”

Given that the central bank is essentially forming monetary policy around the outcome of the reforms – much like the BoE and Brexit – traders will likely be watching every political development with greater scrutiny. The Brazilian government is expecting for the lower house of Congress to vote on the bill before July 18, though protests by lawmakers may still be able to induce short-term risk aversion and volatility. 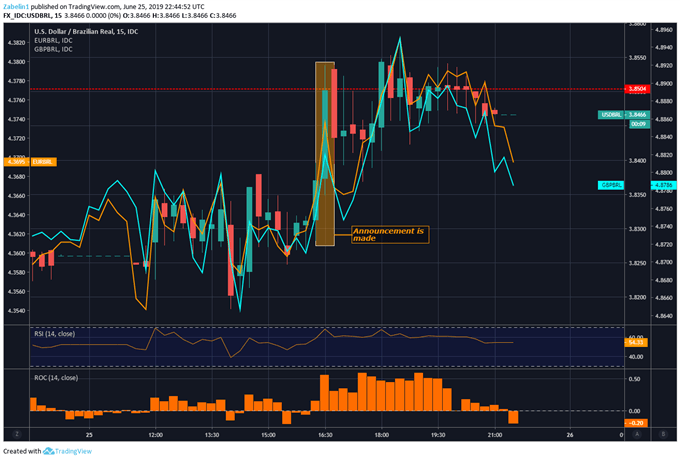 Prior to the plenary vote, the special committee in Congress will be voting on it this week. The signature reform will be subject to a rigorous process and numerous votes, possibly past the initial August deadline. The worry is along the way the reforms will lose some of their potency, especially after a recent amendment changed the projected savings over the course of a decade from 1.237 trillion reais to now 914 billion.